Tropics waking up north of NZ 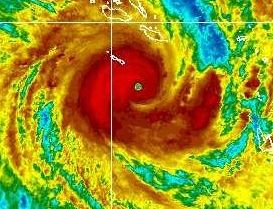 March is the peak of the South Pacific cyclone season and latest computer models show a fairly high chance of a cyclone forming north of New Zealand in the first week of March.

While various models seem confident of a cyclone forming, they aren’t confident about the exact path.  Some show it making a direct hit to Northland at the start of the second week of March while others show the risk zone for a storm tracking westwards towards Queensland (with a high over New Zealand).

Either way a storm looks fairly likely – so WeatherWatch.co.nz will be tracking it.

We hope to have more details this weekend about the direct of this potential storm.

The upper North Island – in particular Auckland, Waikato and the western side of Northland – are desperate for rain with some farmers still saying conditions are drier than they were this time last year.

We’ll keep you posted on any potential rain makers.

Do you need rain?  How much longer can you go for without rain? Post your comments below – and please let us know where you are too!

In the high parts of Coatesville, the wind has dried out the land even more than the lack of rain. My paddocks are covered in massive cracks – many of them are at least 20 cm plus  deep and 3- 4 centimetres wide. Interesting that we usually have at least 3 hawks on the ground eating crickets – good season for them! But really need rain now.

defently drier in dargaville area than last year at the same time, hopefully we get a cyclone soon

Ideally we need it to go in the tasman sea,mix some cooler air into it and the resulting depression sits directly over the country for several days with low centres east and west of the main divides.

We have 10 acres of dust at the moment in Rukuhia, south of Hamilton, haven’t had rain for quite some time now and are getting deperate!  Feeding horses hard feed twice a day and a bale of hay per day, no sign of anything green anywhere.  Please let it rain soon!

Thanks for the heads up about the tropics. It does look likely that a cyclone will form or maybe even two over the next week but it looks like the first one will go east so hopefully the other one may come our way.

I definately need rain here in Hamilton we haven’t had any meaningful rain for weeks. My tank must be getting very low and the gardens need some badly. It is not as bad as last year at this stage though.

On the Kapiti Coast and we are desperate for rain. Our paddocks are completely dried out and no grass growth is going on at all. Our pond (takes up a whole paddock) has completely dried.

It always tracks just to the northeast of us and ultimately south to the chathams like they all do.