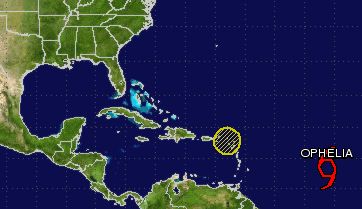 September is the peak of the Northern Hemisphere Tropical Storm season and right now there are three storms roaring across the Atlantic and Pacific Oceans.  For the next month we can expect to hear more tropical storm names with storm activity then likely to rapidly drop off during mid to late October.

Ophelia
In the Atlantic Ocean Tropical Storm Ophelia was born yesterday.  Ophelia is heading west towards the Caribbean but should curve to the north.  Overall meteorologists don’t believe the storm will pose a threat to the US, but it may affect Bermuda.  Ophelia is not predicted to become a Hurricane.

Hilary
In the Pacific Ocean there are two named storms.  The first is Hilary, a tropical storm near the Mexico/Central America border.  Hilary is expected to brush the southern coastline over the next couple days and should become a Hurricane as it starts to head north west out into the open waters of the Pacific Ocean.

Roke
And on the other side of the Pacific former Typhoon Roke (now downgraded to a tropical storm) continues to affect Japan but is now heading back out to sea.  Roke has been a deadly typhoon in Japan killing 6 and leaving several still missing but luckily didn’t cause any serious problems at the damage Fukushima Nuclear Power Plant.

The Northern Hemisphere tropical storm season ends in November at the same time as our official cyclone season kicks off.

Like last season WeatherWatch.co.nz is your one source for cyclone news in the South Pacific and Australia.

– WeatherWatch.co.nz with the National Hurricane Center and TSR