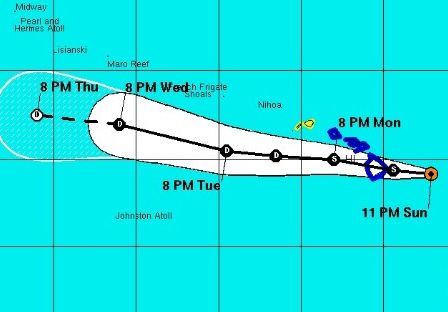 After spreading torrential rain and causing scattered power outages across the island chain, the storm is no longer a tropical depression. It is now classified as a remnant area of low pressure.

Earlier, the National Weather Service issued a flash flood warning for Maui, and flash flood watches covered the rest of the state.

Although the system was dissipating, Honolulu Mayor Kirk Caldwell said, “We need to take it seriously.”

“We’d really like people off the road in their homes, taking care of their loved ones and their neighbors,’ he said.

Concerns centered on the potential for flooding, as public works crews cleared culverts and storm drains.

“We’re out working to make sure that we don’t have flooding wherever possible,” Caldwell said.

When the lights go out in the city

Gusty winds knocked out electricity to about 10,000 customers of Hawaiian Electric Light Companies at different times, primarily on Maui.

“The safety of our employees and customers is our top priority,” said Jay Ignacio, the president of Hawaii Electric Light Company. “We are prepared to restore service as quickly and safely as possible.”

All airports remain open, according to the Hawaii’s Tourism Authority.

Flossie’s impact on Honolulu International Airport was limited. Some carriers canceled or delayed flights ahead of the storm, but the airport’s website showed schedules returning to normal as the storm passed.

Gov. Neil Abercrombie signed an emergency proclamation on Sunday. Evacuation shelters are open, and some government offices and schools are closed. State officials closed some beaches and backcountry trails, as well.

Shoppers stocked up on water, food and other supplies ahead of the storm.

“I got my water, I got my crackers, which is important. You don’t have to cook it on the stove, warm it up, dry, and I have my peanut butter at home. I usually have kaki mochi all dry,” shopper Alive Panui told KITV.

Kaki mochi is a rice snack.