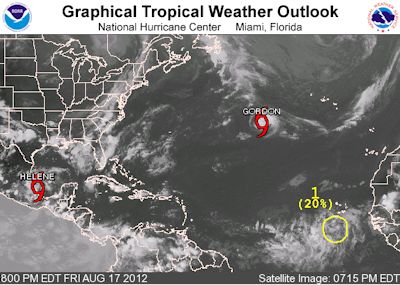 When tropical depressions get ripped apart, they leave a big thumbprint in the atmosphere.  If the conditions are just right, that thumbprint can be the focus for the depression reforming.

And in some cases, growing into a full-blown tropical storm.

That’s exactly what has happened in the Gulf of Mexico, just east of the coast of Mexico.  The remnants of Tropical Depression 7 has reformed and blossomed into Tropical Storm Helene.

The good news is, it won’t be a storm for long.  It is expected to weaken as it makes landfall over the next 24 hours.

The bad news is, it could still dump up to 380mm of rain on northeastern Mexico causing flash flooding and slips.

As tropical storms go, Helene is not expected to be particularly impressive.

Elsewhere in the Atlantic, Tropical Storm Gordon continues to race east.  Tropical storm watches are up for the central and eastern Azores.

And an area just south of the Cape Verde Islands is worth watching.  A tropical wave may develop as it moves west over the next 48 hours.  But, the chances are pretty small.

Overall, things seem to be quieting down for now.  The Atlantic Hurricane season ends on 30 November.