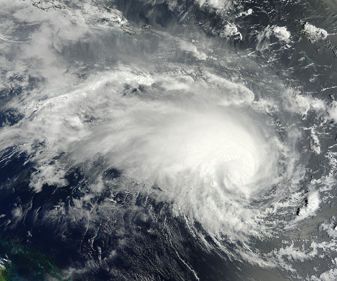 Where it goes from there, is the big question.

One model, the GFS, continues to want to take the low way off to our east.  Too far away to even produce dangerous swells for New Zealand.  The GFS has been consistent in continuing to pull the low further away from us.  However, I am having a hard time buying that as it seems to be the one model taking it so far east.  So, I think we can ignore the GFS for now.

If the GFS is too far to the east, then the second model is too far to the west.  The ECMWF (the European model) tries to pull the low backward, taking it from the Pacific to the Tasman on Thursday.  This would certainly create some dangerous conditions for the North Island, including large swells, very heavy rainfall and strong winds.  However, I think this model is too far the other direction.  That forecast is based on a Tasmanian low developing and pulling the tropical low in.  In order for that Tasmanian low to develop, there would have to be some support for it.  It doesn’t seem like we will have that going into next week.  So, whilst I don’t believe the ECMWF should be ignored right now, I have very little confidence in it.

Finally, there is BOM (the Australian forecaster) which is right in between both the GFS and the ECMWF.  This one seems to be the most reasonable.  If this one pans out, the low would past just to our east.  This would produce strong winds and heavy rain for the North Island starting on Wednesday.  Dangerous swells could develop along the eastern shore of the North Island.  Strong winds could develop across the North Island and then translate south as the low moves south on Thursday and Friday.

So what does this all mean?

It means that we have a forecast that we can’t really put a lot of confidence in yet.  What we do know is that next week the sub-tropics are looking incredibly active and the upper North Island is certainly vulnerable.

As forecasters, we rely heavily on modelling they still only make up part of how we make our predictions.  But this time around the models are fairly chaotic – making it tricky to pinpoint an exact path.

But you can be sure that we will watch this very carefully and keep you up to date on the latest information.

It looks as though the GFS models have completely changed overnight with the low’s path swinging back to the west.

While ECMWF have it swinging to the east – so they’re finally meeting up, as we thought they would do… we just expected this to happen about a couple of days ago!

As I am new to NZ..What will be the worst case scenario for a place like Snells Beach, which has no waves at all?

It all depends on the angle of the low, but generally speaking Auckland copes pretty well with tropical storms as often Coromandel Peninsula to our east and Northland to our north reduce the severity of rain here.  Coastal flooding can be a problem but it needs a specific wind direction (usually a northerly ot north easterly) and very low air pressure to help raise the sea level further.  Of course wind damage can affect the city.

i lookedat Metvuw this morning and their model had the low going eats.

As you say “keep watching this space”

We have a story at 10am today about it – it’s certainly a messy set up but we’re seeing a pattern forming now, finally!