Tropical storm and hurricane heading towards US 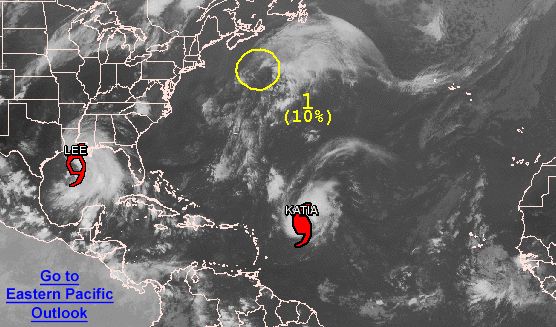 The storm named Katia has become a hurricane again in the Atlantic, the National Hurricane Center said today, at the same time that new Tropical Storm named Lee was announced – this one heading for Louisiana and potentially hurricane ravaged New Orleans.

Katia had briefly weakened into a tropical storm but has since regained strength, the center said.

As of 5 p.m. ET, Katia was roughly 1000kms east of the northern Leeward Islands. Its maximum sustained winds were 120km/h — near the minimum level required to be classified as a hurricane.

Katia was moving in a northwest direction. It is expected to strengthen over the weekend, the center said.

Potentially dangerous swells created by Katia are forecast to begin affecting the Caribbean by late Friday, the center noted. No coastal watches or warnings were in effect in connection with the storm

People in states along the U.S. Gulf coast braced today for strong winds and up to 500mm of rain as Tropical Storm Lee slowly churned towards land.

The storm, which strengthened from a tropical system Friday afternoon, could bring winds of 105km/h when it makes landfall this weekend, CNN meteorologist Sean Morris said.

Louisiana and 10 of its parishes declared states of emergency, according to Gov. Bobby Jindal. LaFourche Parish and the city of Grand Isle issued voluntary evacuation orders, he said, while the New Orleans mayor also declared a state of emergency.

“This is going to be a slow-moving storm. It’s going to bring a lot of rain,” Jindal told reporters Friday.

In Terrebonne Parish, one of the parishes that issued an emergency declaration, officials set up spots where people could go to fill sandbags to try to mitigate flooding from the storm, CNN affiliate WWL reported. Cory Naquin was one such resident.

Between shovels of sand, he told WWL that he was trying to stay ahead of whatever weather might come.

“Nobody knows what the storm’s going to do,” he said. “We don’t know where it’s going, so we’re just going to do what we can, while we can,” Naquin said.

Mississippi Gov. Haley Barbour also declared a state of emergency for parts of southern Mississippi expected to be affected by the storm.

Lee was likely to reach land in the next 48 hours, forecasters said.

The storm is over water as warm as 32C degrees, and atmospheric conditions that are limiting its development should become more favorable to strengthening over the next 24 hours, Morris said.

Tropical storm-force winds were reported at several oil rigs in the Gulf, according to the Miami-based National Hurricane Center.

The storm was barely moving Friday evening, inching northward at 3 mph. About 7 p.m. CT, it was 180 miles west-southwest of the mouth of the Mississippi River and had winds of 45 mph, the Hurricane Center reported. Heavy rain was spreading across southeastern and south-central Louisiana, according to the National Weather Service.

Tropical storm warnings were up for the Gulf coast from Pascagoula, Mississippi, to Sabine Pass, Texas.

Parts of southern Louisiana, Mississippi and Alabama could see 250mm to 350mm of rain by Sunday, with isolated totals of 500mm, according to the hurricane center.

New Orleans, much of which sits below sea level, is likely to see up to 250mm of rain in the next few days, said Mayor Mitch Landrieu. A state of emergency has been declared for the Louisiana city.

“This particular formation in the Gulf of Mexico is troublesome to us, because it is not fully formed. It is very close. It is very unpredictable, and it’s hovering,” he told reporters.

Landrieu urged city residents not to panic, but prepare. “Prepare for the worst and let’s hope for the best,” he said.

Some oil producers began evacuating employees ahead of the storm. About half of oil production in the Gulf and a third of natural gas production have been shut down, according to the Bureau of Ocean Energy Management, Regulation and Enforcement.

BP and ExxonMobil asked workers to leave their Gulf rigs and shut down wells, according to company officials.

Chevron has ordered nonessential workers off the platforms, and Shell said it had evacuated 550 workers as of Friday morning.

In Biloxi, Mississippi, public works crews were working to clean storm drains and catch basins on streets prone to flooding ahead of the expected storm. The city council voted Friday afternoon to declare a state of emergency.

“This will be an extreme multi-day rain event, and there will be issues with localized flooding,” said Sgt. Milton Houseman, the city’s emergency manager. “The good news is that, at this time, with the projections we’ve seen, we don’t expect any issues with river flooding, because the rivers are low.”

In addition to expected flooding from heavy rains and storm surge, the weather is threatening to ruin Labor Day weekend for thousands of beach-goers. It’s also brewing six years to the week after Hurricane Katrina came ashore, devastating parts of Louisiana and Mississippi — including New Orleans.

“Be prepared for whatever may come our way, because we just don’t know,” Landrieu said.