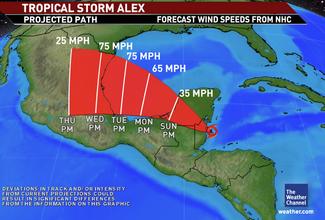 Oil companies Shell and BP began evacuating nonessential personnel from their drilling platforms in the Gulf of Mexico on Saturday as officials kept a wary eye on a tropical storm churning toward Mexico that could wreak havoc on oil spill cleanup efforts.

As much as 2.5 million gallons of oil could flow into the Gulf for two weeks if Tropical Storm Alex forces a work stoppage at the ruptured BP well, the government’s disaster response manager said.

Adm. Thad Allen said gale-force winds near the well head would prompt an evacuation of the thousands of workers and vessels involved in the oil recovery and cleanup effort.

Both Shell and BP were taking precautions ahead of the storm. About 300 people were evacuated from Shell’s production platforms and drilling rigs Saturday, company spokesman Bill Tanner said, adding that evacuations will continue Sunday.

BP began similar evacuations Saturday from three of its rigs in the far south of the Gulf, spokesman Neil Chapman said. He noted that the evacuations do not include anyone involved in the Deepwater Horizon response efforts.

If Alex forces a stoppage in cleanup, however, Allen said it would take 14 days to put everything back in place. That means the containment cap would be off for that period, allowing oil to flow freely. Researchers have estimated that between 35,000 barrels — about 1.5 million gallons — and 60,000 barrels — about 2.5 million gallons — of oil are gushing into the ocean every day.

Anxiety levels rose Saturday as Alex churned toward Mexico with a potential for hurricane-force winds in the coming days.

The latest computer models show the predicted path of the storm passing well south of the United States, making landfall in Mexico as a hurricane in the middle of the week, according to the National Weather Service. If it continues on its predicted track, the storm would not directly pass over oil-affected areas — but forecasters have not ruled out an easterly shift in Alex’s path.

“We all know the weather is unpredictable, and we could have a sudden last-minute change,” Allen said.

Alex — the first named storm of what is expected to be a fierce Atlantic hurricane season — formed in the Caribbean on Saturday and had maximum sustained winds near 65 mph. It was heading toward Belize and Mexico’s Yucatan Peninsula.

Click here to read about the hurricane threat to the Gulf of Mexico oil spill.