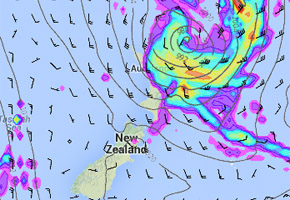 A tropical low looks to affect New Zealand next week, mainly for the North Island. The South Island, while it will feel some affects from this low for the upper half, shouldn’t have any issues – at least not with the latest models. The system actually begins its life tomorrow over the Solomon Islands.

On Sunday this tropical mass comes together over the Solomons, it forms into a low and on Monday quickly starts to drop towards the north of New Zealand. The main thing people will notice in the upper North Island will be thickening high cloud in the afternoon, high cloud may thicken about Northland from morning. Winds will remain generally light.

Tuesday sees a now well formed and deepening low sitting just to the northeast of the North Island, south to southeasterly winds will increase about most of the North Island during the day with the winds becoming strongest evening onwards. The centre pressure is currently forecast to reach 988 hpa around midnight. There is a risk of gales at night anywhere north of Hawkes Bay along the east coast in exposed areas, eastern Bay Of Plenty and then Auckland / Coromandel northwards.

Rain won’t become too much of an issue at this stage and is not likely to be a big issue for western regions during the course of this low.

The low deepens slightly more on Wednesday with it’s centre at 986 hpa, it doesn’t move much but the bulk of the energy with this system pushes further southwards. Strong to gale southeasterly winds now shift to the lower half of the North Island including the east and west coasts, other regions likely to get strong winds will be Auckland northwards with strong to gale southwesterly winds looking likely.

Heavy rain now becomes an issue but only for the east coast of the North Island, heaviest falls are likely to be in the ranges. At this stage while rain may well be heavy it currently isn’t indicating torrential falls, this could change however as long range forecasts sometimes do. 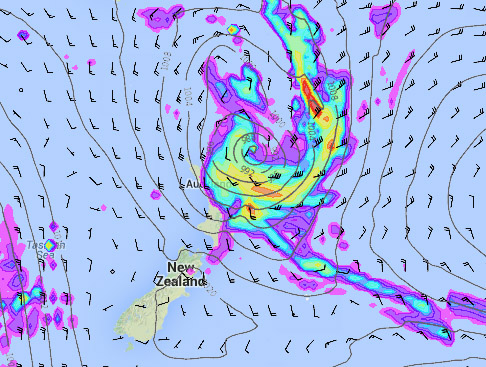 How does WeatherWatch see Cook Strait behaving for this one. Will it funnel into the Strait & will it drag up cold air, or just be the warm/humid stuff? SE via Sth Wairarapa and Rimutakas is bad here, but if it blasts around via both Wellington and Cook, vroooom; June again. Dislike the SE, can arrive via any 3 directions depending where the isobars are. ESE guaranteed with any S or SE.

Still too far out to know Chris. Keep an eye on our wind maps as they will likely be the most accurate way of measuring wind speed and direction. We’ll have a more concrete idea by Monday that’s for sure.  Certainly can be a nasty wind direction for your area so we’ll be monitoring that closely.