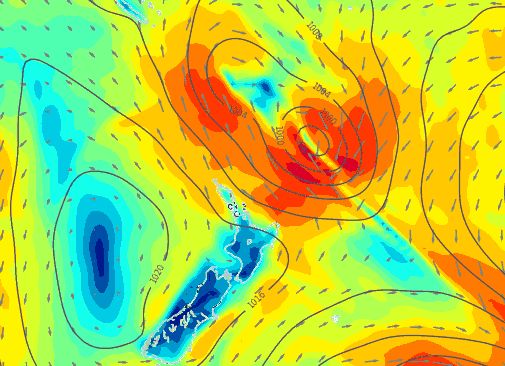 WeatherWatch.co.nz forecasters say a deepening low coming out of the tropics is likely next week – but the forecasting jury is still out as to whether or not New Zealand will take a direct hit.

Long range models from opposing organisations paint a similar picture – a tropical low will form north of New Zealand in the coming days then drop south towards us next week.

However the exact placement of the centre of the low will have significant impacts on the weather delivered to us.  If it’s just offshore we can expect wind and cloud, if it moves closer heavy rain and potentially hurricane force winds for some areas.

“At this early stage we believe this potential storm has a higher likelihood of tracking just east of us, but as with any tropical low coming towards northern New Zealand it’s like balancing an egg on a roof, chances are it will roll down one side or the other” says head weather analyst Philip Duncan.  “Most, but not all, tropical lows track from the north to the south east, this places them very near Northland and Gisborne but then they can often head out into the Pacific”.

Reliable computer models used independently by WeatherWatch.co.nz suggest a 65% chance of this happening, but also show a chance that northern areas may be exposed to a period of heavy rain and/or gales.

“We’ll have a much better idea in the coming few days as to what could happen next week, at this stage there is no need to panic as the models show the centre of the low offshore, but it is close enough to create some early interest”.

Mr Duncan says there is a chance the entire system could skirt New Zealand just offshore.  “We’re just wanting to give people an early heads up that next week there is a the potential for severe weather in the north and certainly some dangerous sea conditions for northern and north eastern coastlines.  The coming days will tell if any severe weather is locked in or not”.

The tropics have been fairly quiet in recent weeks thanks to high pressure in the area, helping to feed windy weather to Queensland and further south to New Zealand – with calm, non-active, conditions in between.

Next week there are likely to be highs in the Tasman Sea and western Pacific – placing New Zealand in a temporary but vulnerable position for a few days mid-next week from this northern low pressure system that is expected to intensify as it gets closer to the country.

– Image / Wind map for next Weds

Looks pretty mean! Check out this and scroll through the drop down menu to next Wednesday.

Great detail on those maps, thanks for making them available. And thanks for just been more accurate, more local and more humble than your bumbling counterpart. Used you exclusively for over a year for outside work decisions, the percentages coupled with wind strength/direction make it easy and you admit the odd time you are wrong. Another breath of fresh WW air!

Cool! Thanks for that message, the team appreciates it 😀

Hopefully we can deliver the same results for you in the coming future.