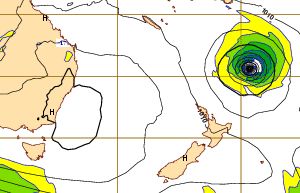 The Fiji Meteorological Service has confirmed this morning that a tropical low has now formed east of Vanuatu.

The tropical low is expected to become a tropical cyclone before the end of Sunday with cyclone status possible as early as Saturday night.  WeatherWatch.co.nz says it looks like it may become the largest low pressure system in Australasia next week as it tracks south east, to the north east of the North Island.

The storm, which WeatherWatch.co.nz says could reach category four status, is predicted to develop near three populated nations, however despite it’s size and location Head Weather Analyst Philip Duncan says the threat to land may not be high.

“There is no doubt that if this storm forms, as the models have been predicting all week, it will be a large scale cyclone.  However it seems that Mother Nature has plans to send this one out over the open waters and not into populated places, which will be of huge relief after we saw what Yasi was capable of”.

ECMWF long range weather map showing the potential cyclone next Wednesday.  The colours around the low indicate strong to hurricane force winds.  As you can see the rest of the region is mostly calm.

The low has developed amongst a large belt of thunderstorms around Vanuatu.

Mr Duncan says this low will deepen then quickly move in a south easterly direction.  “It will brush the southern side of Fiji’s main island bringing some wind and rain but severe weather currently looks unlikely”.

And for New Zealand?  “Well we expect some cloud and wind but the models are still indicating it will be too far east to cause major weather concerns here, however the system looks like it will still be a severe cyclone when it tracks into New Zealand’s waters on Wednesday or Thursday and that could bring dangerous seas”.

Rough seas are most likely around the middle or end of next week and mainly around East Cape, Gisborne and Hawkes Bay.  “While the weather may well be settled along those eastern beaches next week it’s very important that we understand what is happening out at sea.   Large waves and invisible rips are highly likely for a time later next week along all east coast beaches of the North Island”.

The predictions are based mostly on long range computer models from Europe which, for this cyclone season, have been highly accurate, according to WeatherWatch.co.nz forecasters.  Yesterday America’s long range modelling service also started predicting the low would form.

WeatherWatch.co.nz says despite the large scale of the predicted storm people should not panic as it’s unlikely to make a direct hit here and at this stage no severe weather is predicted in New Zealand however those who live in north eastern New Zealand are advised to stay up to date with the latest developments on this system.

Residents in Vanuatu, New Caledonia, Fiji and Tonga should check with their local weather providers for the latest warnings, watches and marine forecasts.

May I suggest that Weather Watch view latest BOM satellite pics. It clearly shows two centres of possible cyclonic activity. i.e. 1st centred around 15-17deg south 166east and looking very cyclonic. The second centred also around 15 to 17 deg south and about 180 east – this system less well defined. I would venture to say that the more western system is about to formally become a cyclone and I predict that it will move west towards the North Queensland coast – a similar track to Cyclone Yasi and possibly of the same intensity.
The more eastern system is more of a dilemma in my book.It is possible that it may be swallowed up by the western system and that the area of concern undergo anticyclogenesis which will suppress cyclonic development as predicted by Weather Watch experts.
What have you got to say?

The only low we’re watching is the one near Vanuatu.  There are many thunderstorms in this area stretching right across towards Fiji and beyond, some appear to be spiralling but there are no other areas of concern apart from this one low that is slowly deepening – and we think will become a tropical cyclone within 24 to 48 hours.  The global models also aren’t supporting any other new areas of low air pressure – and certainly nothing to indicate any system heading towards Australia.  Sometimes the clouds can play tricks on what’s really happening – ie, they don’t represent what the air pressure is doing.  So it appears to be tracking west towards Australia but the low itself is going to be heading south then south east.

Thanks for your thoughts and question

I would suggest that you watch aareas and not something defined as “your area of concern”.
Time of course will tell – be interesting as to what actually eventuates!!

hear what your saying pete, did some checking, even nz met office shows a bit of what your talking, thanks, pays to shop around aye lol

ooh exciting, a wager perhaps? My money’s on Weatherwatch but I guess we’ll have to wait and see.