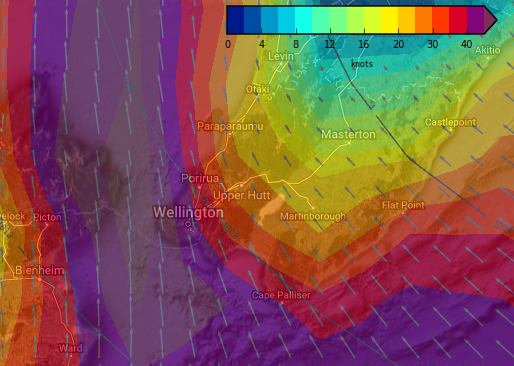 Updated 11:29am — Heavy snow has shut more State Highways in the North Island today while flights continue to be cancelled and delayed at Wellington due to gale force southerlies.

WELLINGTON AIRPORT
Some flights are managing to take off and depart from Wellington.

As of 11:20am winds were averaging 70km/h and gusting to 110km/h in the city and Wellington Airport.

Winds of 167km/h have been recorded in Cook Strait today where WeatherWatch.co.nz said yesterday would be the place most affected by these winds over Thursday – and hurricane force winds will remain through the Strait today.

At this stage we still expect that the southerly winds peaked during Thursday morning and while they should ease back a bit across Thursday PM gale force winds and some flight problems are expected to last across much of the day there.

We expect winds to very slowly easy back a bit as we head through Thursday PM.

SNOW, ICE, SLIPS CLOSE MORE NORTH ISLAND STATE HIGHWAYS ON THURSDAY
Rain is now spreading into the lower North Island from the east – and this will continue as heavy snow through the Central North Island and is why WeatherWatch.co.nz says further highway closures or problems are possible today.

As WeatherWatch.co.nz exclusively forecast back on Monday all highways in the Central North Island are vulnerable to heavy snow today with as much as half a metre possible in higher exposed elevations (like the Desert Road).

Further road closures are likely across Thursday and Friday in the North Island – but conditions improve quickly across Friday in most areas.

I think we are having a storm as defined by the Oxford dictionary.
Here in Wellington it is a Southerly storm.

Yes, certainly! As we said last weekend this isnt a storm overall BUT will produce “localised stormy weather capable of producing severe weather” – this is why it’s not a howling gale everywhere, it’s just through the Cook Strait to Taranaki area. In saying that – yes you could absolutely call this is a Southerly Storm for Wellington. But not a storm for NZ.  (otherwise when an actual storm hits we have no words left to describe it!)

Hi all, if you are in a situation where you HAVE to take SH3, be aware it will be an uncomfortable trip with the wind. I’m in Hawera, South Taranaki and it is blustery enough to push empty rubbish bins up the street. Some heavy belts of rain fell on Tuesday night but yesterday and today little rain has fallen. It is very damp grey and windy. Your biggest problem will be wind gusts, road spray/mist and debri on the road, I imagine. Be safe 🙂

Very helpful update for motorists having to go through Taranaki today/tonight. Thanks a lot!

Cheers WW. Heres another update! About twenty minutes after I my first comment a strong gust of wind went through and the gusts have been very strong ever since. The town Fire Siren/Alarm has gone off about three or four times – our local Fire boys and girls are busy. Its either one major event they are needing backup on or multiple smaller events. The lights have been flickering and I heard one of my relatives has a large tree fallen across their driveway.

Went out for drive before and driving at 50kmhr the wind is knocking the car.

Aha! Just learnt a truck has tipped over some where locally. That will be what the Fire Service is busy with.

Coldest, gusty morning in New Lynn SW.
Definitely not calm, as breeze continued thru the night.

Its snowing on the hills around rotorua. Any chance of it snowing in town?

I wouldn’t have thought so. There is snow close by in Mamaku as you say, however it is 560 meters above sea level where as Rotorua is 280 meters. However the weather can throw surprises at you, but mostly I would be saying it doesn’t seem very likely but a small chance you could see some flurries.