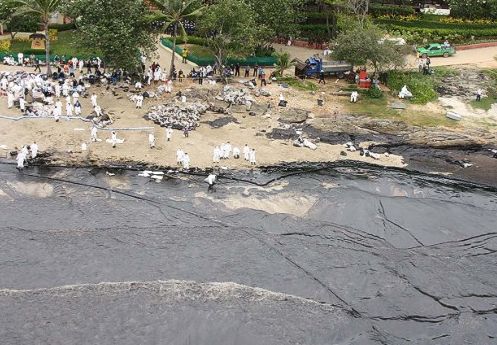 Tourists staying at Ao Phrao (Phrao Bay) on Thailand’s island of Koh Samet have been evacuated as the bay turned black from an oil spill over the weekend.

Authorities estimated that around 5,000 liters of crude oil have washed up on the island, having leaked into the ocean from an offshore pipeline belonging to PTT Global Chemical, Thailand’s largest petrochemical producer.

The total leakage is estimated at 50,000 liters.

Due to its beautiful beaches and proximity to Bangkok — the travel time from the capital is a little less than four hours by bus and then boat — the island has long been a popular Thai weekend destination.

Tourist activities on the island are largely ocean-oriented and include jet-skiing, snorkeling and banana-boating.

It’s still unclear to what extent the spill will affect local tourism, but the damage was initially reportedly limited to one beach, at Ao Phrao. There are 14 beaches on the island.

“We’ve had some hotel cancellations on Samet,” Rayong province tourism authority director Chuchart Oncharoen told the Bangkok Post. “Whether this has a long-term impact on the island depends on how quickly PTT cleans up the mess.”

The affected beach is on the less populated Western part of the island, where resorts have closed and tourists have been evacuated to hotels in other areas.

The island is currently in its tourism low season — the high season is from October to April.

“By far the majority of tourists who go to Koh Samet stay at resorts and hotels on the eastern side of the island,” Thailand travel blogger Richard Barrow told CNN.

However, an opposition MP has suggested the damage from the spill may be worse than first thought, reports Australia’s ABC.

“If that (50,000 litres) was the real amount, they should have already eliminated it — they should have solved the problem fast enough before it reached Samet island,” said Sathit Pitutacha, from Thailand’s Democrat Party.

The environmental group Greenpeace also called the spill “massive,” according to the ABC, and called upon the Thai government to end oil exploration in the Gulf of Thailand.

Some travelers to Phrao Bay have already posted about the unexpected change in their itineraries.

“The oil completely covered the beach when we woke up in the morning,” wrote Tripadvisor reviewer MatJens about his curtailed stay at Lima Coco resort, one of the popular hotels in the area that has been closed.

“We rebooked to a hotel on Ko Chang and the personnel at Lima Coco were very helpful getting us there. We also got a voucher covering the days we paid in advance,” wrote MatJens on Monday.

A statement from PTT Global Chemical said the company had deployed booms to contain the oil as well as oil spill dispersant.

It added that the Thai navy and approximately 300 workers from PTT Global Chemical are continuing to clean up the area.