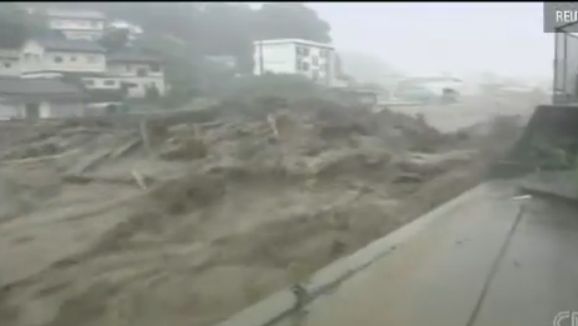 Extraordinarily heavy rains have left hundreds of people cut off and at least 28 dead on the southern Japanese island of Kyushu, local authorities said Monday, and more storms could be on their way.

The torrential rain has wreaked havoc across three prefectures on Kyushu over the past several days, causing mudslides, flooding houses and swelling rivers to dangerous levels.

People have been killed after being buried in their homes by landslides and swept away by overflowing rivers.

By Monday, 28 people had died as a result of the the extreme weather, and a further four are missing, according to local authorities in the prefectures of Oita, Kumamoto and Fukuoka. The overwhelming majority of deaths were in Kumamoto.

The downpours have damaged homes across the region and prompted the temporary evacuation of thousands of people, authorities said.

Hundreds of people also remain cut off by mudslides and fallen trees. Local governments have been sending in food and other relief items to the isolated areas via helicopters and teams traveling on foot.

At times, the rain has reached levels never experienced before in the region, the Japan Meteorological Agency said. In one part of Kumamoto, the equivalent of one month’s rain fell in the space of just eight hours last week, it said.

The weather conditions have improved Monday, the meteorological agency said, but further heavy rain was expected, including thunderstorms over Kumamoto. The agency warned of a risk of more floods and landslides.

Can you post details about how much rain they’ve had? I’ve found a number of obscure references that are pretty insane – e.g. 500mm in 24 hours, up to 90mm per hour etc., but can’t find anything definitive, or how much total rain they’ve had in this event. Obviously enough to make even Fiordland totals look relatively normal… hopefully the incoming typhoon decides to head back out to sea.

Don’t have exact figures but going on this CNN story around 315mm fell in just 8 hours. Incredible stats.  Try searching the JMA website for more info.