Toronto mops up after unprecedented deluge 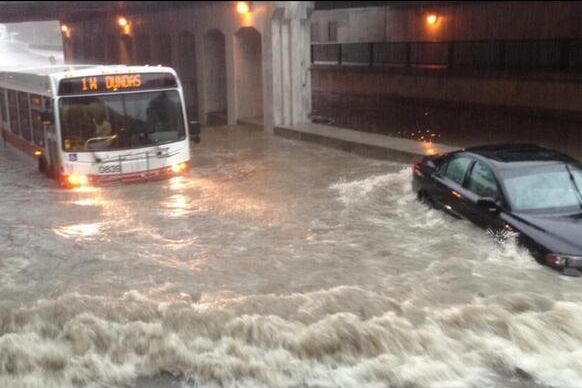 Canada’s largest city was hit by unprecedented rainfall smashing 24 hour and monthly records as the skies opened up.

Around the main airport area 126mm of rain fell in about 2 hours…that’s about two months worth for this time of year.

The deluge lead to hundreds of thousands of people with no electricity, including the suburb of Brampton near the airport which lost power for 4 hours in the evening.

Some people still have no power today.

Downtown Toronto flooded and one of the commuter trains got stuck as the water climbed into the lower levels of the carriages. Footage even aired of a snake that swam into one of them.

The subways were closed due to flooding and roof collapsed due to weight of water and thousands of basements flooded.

Dozens of people were evacuated from their homes or buildings.

Cars were also abandoned across the city, including a $250,000 Ferrari in an underpass downtown which became submerged completely.

Toronto is no stranger to summer deluges.  In August 2005 Air France flight 358 crash landed at Toronto’s Pearson International Airport during a violent summer thunderstorm that produced significant flooding on the runway.

The jet ran straight off the runway and down a bank, bursting into flames instantly.  Incredibly, no one died on board the Airbus A340 with 309 people onboard.  The plane was destroyed.

The region has also been hit by tornados in the past, as it is an extension from tornado alley in the US.