Tornados kill at least 9 in Mississippi and Alabama 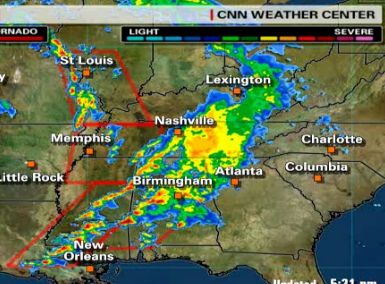 But the city’s mayor said it appears no one was injured by the storm, which she said tore the roof from a hotel and caused major damage to a bank and numerous homes but narrowly bypassed an elementary school and church daycare packed with about 650 children between them.

“We have a lot to be grateful for,” Mayor Rosemary Aultman said. “It could have been a lot worse.”

The agency asked people to stay away from the area, and said it had deployed its mobile command post to the area to oversee response to the storm.

The tornado in Clinton was one of several reported Friday across Mississippi and Alabama. There were numerous reports of damage to homes and businesses, but no immediate word of injuries in the outbreak.

Choctaw County Sheriff Todd Kemp reported structural damage and trees down near the site of a tornado in State Line, Mississippi.

In Jackson, numerous power poles were snapped along the storm’s path through the city, leaving more than 23,400 customers without power, utility company Entergy Mississippi said.

The National Weather Service said it had received a report of a tornado near Melvin, Alabama, that may have caused damage to the Hunt Oil Refinery there.

Tornadoes also were reported near Linden in Alabama and in or near the cities of Loper, Madden, Mount Sterling and Ludlow in Mississippi, according to the Weather Service.

The threat of storms was far from over. The National Weather Service predicted a continued threat of thunderstorms and tornadoes in parts of the Southeast and Midwest through Saturday as the storms moved northeast.

Of immediate concern were tens of thousands of fans gathered for a weekend of races at the Talladega Superspeedway in Alabama, which was under a tornado watch until 9 p.m.

Some 30,000 people were camped out, some in tents, on the infield of the speedway, said Steve Dover, spokesman for the Talladega County Emergency Management Agency. Thousands more were seated in the grandstands, he said.

Fans have been asked to secure anything that could become flying debris, to make plans for evacuating in the event of bad weather and to monitor weather reports, Dover said. If the need arises, he said, authorities would open up traffic lanes leading into the track to speed evacuations, but he said there’s little shelter at the track itself.

The storms were the latest in a round of severe weather that has hit parts of the Midwest and South since Thursday, when nine people died in Arkansas and Oklahoma, according to state and local authorities.

In the Mississippi storm, the National Weather Service reported trees down and possible structural damage in several locations, and said it had received reports of more than 5 inches of rain.

The storm tore through parts of the Midwest on Thursday, leaving a trail of downed trees and power lines, scattered cars and crushed homes as it moved east. It killed two people in the southeastern Oklahoma town of Tushka, where authorities say a tornado touched down Thursday night. It also left seven dead when trees fell on homes in five incidents in Arkansas, authorities said.

In the most recent discovery, rescue crews found a 34-year-old woman lying in bed with her 7-year-old child, whom she had apparently come to comfort during the overnight storm, said Little Rock Fire Department Capt. Randy Davenport.

The two were killed by a giant oak tree that fell on the home, Davenport said. An 18-month-old child in another bedroom survived unharmed, he said.

Nearly 36,000 people were without power Friday morning in Arkansas, half of them in Pulaski County, the state Department of Emergency Management reported.

The victims included a 24-year-old man and an 18-month-old girl who died when a tree fell on their mobile home while they were sleeping in Garland County, the sheriff’s office there said.

In Bald Knob, Arkansas, a 6-year-old boy died when a tree fell on his house, KTHV reported. A man died in Scott, Arkansas, when a tree fell into his recreational vehicle, crushing him, according to police. The Arkansas Department of Emergency Management also reported a death from a falling tree in St. Francis County.

In Oklahoma, in addition to the two deaths, the storm caused 15 injuries and extensive property damage in the southeastern town of Tushka, about 125 miles south of Tulsa. The state Department of Emergency Management said a “relatively large” tornado sliced through the area around Tushka.

“There’s a tremendous amount of property damage,” said Capt. Jeff Sewell with the Oklahoma Highway Patrol. “Cars have been blown together. A lot of electric wires are down all over the place. Several houses were totally destroyed.”

In Oklahoma, the Weather Service received reports from media and trained storm spotters who witnessed the tornado in Tushka. Sewell said the tornado stayed on the ground for seven miles.

The tornado was reported about three miles north of Caney, Oklahoma, near the towns of Tushka and Atoka, said Lamont Bain with the National Weather Service in Norman, Oklahoma.

Damage was also reported in the city of Hominy, in the Allen and Stonewall areas of Pontotoc County, and in the Madill area, the state Department of Emergency Management said.

South of Stonewall, a mobile home had its roof blown off and three other homes also lost their roofs, the department said. A tree fell on a car, and softball-sized hail was reported near Hickory.

Not sure about the title, ‘Tornados kill at least 9 in Mississippi and Alabama‘?

There were 9 deaths in recent days attributed to tornadic storms in Oklahoma and Arkansas, of which only the 2 elderly sisters in their Oklahoma mobile home was thought to be directly tornado related. The other 7 victims in Arkansas were all struck by crashing trees, apparently brought down by straight-line/downdraft winds and/or lightning.

Sadly, there was also a further report today of a tornado tossing a mobile home nearly a quarter of a mile in Marengo County, Alabama, killing a man inside.