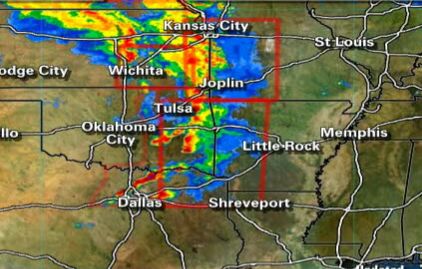 Twisters also brewed in Dallas and several northern Texas counties, according to the National Weather Service, with at least one tornado reported on the ground.

There was no rest for the weary and grieving.

Joplin, Missouri, where 124 died in a tornado Sunday, was briefly under a tornado warning late Tuesday, but it was later lifted. Still, the city braced for high winds.

Two motorists died when an uprooted tree slammed into their van in Stafford County, Kansas, according to the state adjutant general’s office.

Canadian County, Oklahoma, Sheriff Randall Edwards told CNN a large tornado that crossed I-40 near El Reno destroyed residences and caused a gas leak at an energy plant west of the state capital.

The twister injured motorists on I-40 and U.S. 81, Canadian County Emergency Management Director Jerry Smith said. There were reports of property damage in the area.

Police and fire crews are searching for a missing 3-year-old old child in Piedmont, northwest of Oklahoma City, according to an emergency services worker who asked not to be named because she was not authorized to speak to the media.

“Our town is totally leveled,” she said.

“All you can find now is debris and foundations,” said the emergency services worker, her voice cracking with emotion. “We’re still searching for survivors. We’ll be here all night.”

Another tornado was seen at Chickasha, about 40 miles southwest of Oklahoma City. It later reached Newcastle, before pushing through Moore and Norman, suburbs of Oklahoma City. The National Weather Service warned residents and I-44 drivers to take precautionary action.

About 1,200 people packed a shelter in Newcastle, a bedroom community near Oklahoma City, during the storm, said City Manager Nick Nazar. “That saved lives.”

“We have been extremely lucky,” he said. “Minor injuries so far.”

About 100 people were displaced, and 50 homes were rendered uninhabitable, Nazar told CNN. Two or three businesses were damaged, as was an elementary school.

Statewide, at least 60 people were hurt and nearly 58,000 homes lost power, according to the Oklahoma Department of Emergency Management.

The tornado that passed through Chickasha also damaged several other communities, including Newcastle.

“It came right past the store,” said Chickasha AutoZone employee Nathaniel Charlton. “They had a little debris thrown across the parking lot. It was on the ground, but it wasn’t bad.”

Sirens went off about 20 minutes before the storm pushed through, Charlton told CNN.

“This is an extremely dangerous and life-threatening situation,” the National Weather Service said during the storms.

No tornado damage was immediately reported within Oklahoma City’s borders.

Some employees at the weather agency’s Storm Prediction Center in Norman briefly took shelter as a tornado approached, a spokesman told CNN.

“We’re still not out of the woods yet,” she told CNN’s Anderson Cooper as strong storms moved across her state Tuesday evening. First responders were heading toward communities that have reported damage to homes, Fallin said.

Randy McCown, administrator at First Baptist Church of Piedmont, said the church was operating as a shelter for residents.

The University of Oklahoma, based in Norman, on Tuesday afternoon suspended classes at its three campuses.

At Norman’s Tarahumara Restaurant, which specializes in Mexican food, all 20 employees showed up for work, though none of the customers did for nearly two hours preceding the storm’s arrival, said manager Juan de Leon.

As the storm struck at about 5:45 p.m., he and the wait staff watched news programs on the restaurant’s 10 television sets in fear, he said. But when it hit, they were unimpressed. “Just rain,” said de Leon in a telephone interview. “It looked like normal rain.” Hail was mixed in, but the bits of ice were nothing special, “little bitty ones,” he said.

Two hours later, he said, the restaurant had filled up and it was business as usual.

A tornado was reported Tuesday in the Texas community of Bedford.

The tornado that struck Joplin on Sunday killed at least 124 people, authorities said Tuesday, making it the deadliest single U.S. tornado since modern record-keeping began more than 60 years ago