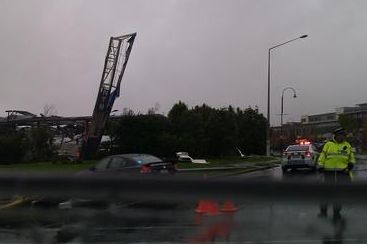 Earlier today WeatherWatch.co.nz estimated winds were averaging 200km/h within the Albany tornado but this evening raised that wind speed to 220km/h after more damage reports came in.

An EF2 tornado is described as one that causes “considerable damage” and has sustained winds up to 220km/h.

Photo — “This photo captures the Albany Mega Center Sign damage, lots of debris and Placemakers in the background. Can also see police blocking the road” / Uploaded by: Joseph Armstrong

Have photos of the tornado or damage?  Send them to us by clicking here

On Tuesday evening WeatherWatch.co.nz says further tornados are “unlikely” with the main band now fading as it tracks over Bay of Plenty and into the Gisborne and Hawkes Bay ranges.

No other areas of concern remain around the Top Half of the North Island according to WeatherWatch.co.nz however isolated heavy showers are still possible, along wtih a low risk of thunder.

However the rough weather isn’t over yet.  This evening WeatherWatch.co.nz has had reports of numerous lightning strikes around Manawatu with one reader, “Chell”, telling us over 25 lightning flashes were seen in 30 minutes .

The live and free lightning tracker at WeatherWatch.co.nz confirms activity over Manawatu and Wanganui with active areas remaining in the Tasman Sea (well away from land) and another band east of Northland – moving away from the region.

A belt of thunderstorms may also move into the west coast of the upper South Island and, to a lesser extent, Taranaki during Wednesday.

And the heavy rain and thunderstorms continue as Autumn kicks up a notch.  WeatherWatch.co.nz predicts more thunderstorms and squalls (which can cause minor property damage) this Friday and Saturday as another large low moves into the Tasman Sea.

Heavy rain is expected in western and northern facing regions this Friday especially between Waitomo and Westland.

Is there an end in sight?

Long range models show an unsettled period for the next week, as we predicted at the end of April.  However models are still not agreeing on just how unsettled it will be.  Some are picking more sub-tropical lows while others show more westerlies.

Our feeling is that a high should move in to the Tasman Sea early next week but it’s still unclear as to how strong it will be over New Zealand.  However if it does cover much of the Tasman it will significantly limit further thunderstorm and rain events for northern and western New Zealand.

Some models are still showing signs of a low affecting East Cape, Gisborne and Hawkes Bay in about 7 to 10 days time but our confidence remains very low of this eventuating.