Tornado outbreak continues across US 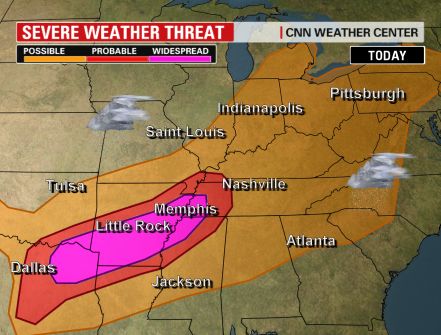 Meteorologists from Texas to Kentucky, a day after a similar round of storms, were jammed Wednedady morning NZT with reports of tornado touchdowns from storm spotters and citizens.

Matt Bishop with the weather service’s Fort Worth office, said the staff had heard of multiple reports of damage in northeastern Texas, although he was unaware of any injuries.

A tornado warning was issued for Crittenden County, Arkansas, just west of the border with Tennessee, near Memphis. Warnings were issued throughout the Memphis region, said forecaster Marlene Mickelson. There were no reports of tornadoes on the ground.

Meteorologists at the Tulsa, Oklahoma, office tracked a string of storms and possible tornado activity near Fort Smith, Arkansas, said forecaster Chuck Hodges. There were reports of hail and winds reaching 130km/h near Fort Smith.

This is a “particularly dangerous situation,” the Weather Service’s Storm Prediction Center in Norman, Oklahoma, said of the outlook for tornadoes.

Destructive tornadoes, softball-size hail, wind gusts to 115km/h and dangerous lightning are possible in and near this watch area.

The bad weather extended to the east. A tornado warning was issued Tuesday afternoon in Rome, New York.

On Wednesday, portions of Kentucky and Tennessee will be at moderate risk of severe thunderstorms, along with northeast and east-central Mississippi, the northern half of Alabama and northwest Georgia, the Storm Prediction Center said. An area between the Mississippi River and the Appalachian Mountains is “likely to see a widespread/potentially dangerous severe weather event,” forecasters said.

Arkansas may be under the gun for the second time this week. More than 60,000 people were without power Tuesday morning after a rash of severe storms tore through the state Monday, leaving 10 dead and destroying more than a dozen homes.

According to the Arkansas Department of Emergency Management, four fatalities were storm-related and six resulted from flooding.

The weather also spawned a suspected tornado that struck an Air Force base, military officials said, and prompted the Arkansas governor to declare a state of emergency.

In Faulkner County, at least four people died in the severe thunderstorms, according to Faulkner County Office of Emergency Management spokesman Stephen Hawk.

Two people died in Madison County, one in Washington County, two in Benton County and one in Perry County.

The governor said he was surprised there were no more fatalities, given the extent of the damage. The ground is so saturated that instead of snapping trees, high winds pulled them out of the ground, he said.

And “it may not be over,” he said. “… I think Arkansans need to be very cautious.”

House-to-house searches were being conducted in Vilonia, Hawk said. About 15 houses are destroyed, he said, and “within the three-mile path of the storm, everything was affected. There are untold numbers of affected houses … The only grocery store in town, the roof was pretty much torn off.”

On Monday night, Madison County Sheriff Phillip Morgan said the bodies of an elderly man and woman were found after floodwaters swept away the couple’s car on Highway 23 south of Huntsville, in northwest Arkansas. The deaths are attributed to rising flood waters along War Eagle Creek.

Also in northwest Arkansas, the Washington County Sheriff’s Office confirmed the death of 38-year-old Consuelo Santillano, who authorities say was swept away by rapidly moving water across Highway 265 South.

And a possible tornado struck Little Rock Air Force Base in central Arkansas, damaging at least 16 homes and knocking out power to some parts of the base, military officials said.

Bob Oldham, a spokesman for the base, reported two minor injuries and some damage to aircraft at the base. The number of aircraft and the extent of damage were not immediately clear, Oldham said early Tuesday.

Beebe told CNN later in the day that three C-130s were damaged to the point that, according to preliminary reports, they are inoperable “without significant repairs.”

The state also saw seven deaths in an earlier round of severe weather this month.

Other parts of the state were flooded after several days of unceasing rain.

Steve Wilkes of Fayetteville said his house was spared damage from a nearby flooded creek, but some of his friends are dealing with flooded basements.

“I’ve lived here for more than 20 years. I’ve never seen anything like this in my life,” Wilkes said. “I saw water 2 to 3 feet deep across roadways that have never flooded.”

In various parts of the state, the storms flipped over cars, damaged homes and knocked out power to tens of thousands, emergency management officials said. Some areas reported gusts of up to 70 mph.

Beebe declared a state of emergency Monday night “in response to the severe storms and flooding that have impacted Arkansas and are expected to continue in the coming days,” according to a statement on the governor’s website.

The declaration is retroactive to include storms that began on April 19, according to the statement.