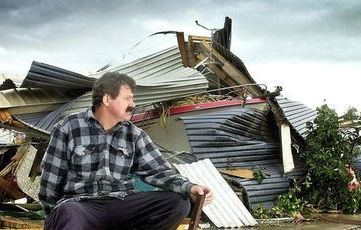 When Brent Willetts heard his wife shout from their house, he thought she was calling him for lunch.

It was around midday on a Saturday, November 2001, and Willetts was in his workshop rewiring his weed-eater. He’d just heard a radio report of a mini tornado which had touched down by the Rangitaiki River but he could hear nothing unusual outside.

Little did he know the tornado was headed his way, ripping at barns, cowsheds, trees and hedges as it roared towards Te Rahu Rd where the Willetts lived, 6km southwest of Whakatane.

The next scream from his wife Chris was of the “blood curdling” type – “one of those ones that really frighten you and make all the hairs stand up on the back of your neck”.

Willetts bolted for the house, thinking his wife had been hurt. It was then the tornado hit, roaring in with the sound of “100 lions”, blowing the windows out, ripping apart a 100-year-old macrocarpa tree and flattening the garden with its sucking vortex of rage.

The neighbour’s roof had been torn off. Vaulting a high fence, he ran inside to rescue the woman and her daughter who were cowering under a kitchen table. But it wasn’t until he saw the mess of twisted debris – the remains of his three-bay implement shed – that Willetts realised just how close he had come to being killed.

The 3m rolling doors had been torn off and flung across the workbench where he had been standing minutes earlier. His workshop was wrecked. The vice he’d been using to fix the weedeater had been ripped from the bench and hurled into a paddock. Most of his tools were scattered hundreds of metres throughout the surrounding farmland. “The neighbour’s gun cabinet ended up in my workshop.”

The shed’s roofing iron was gone. Gone too were the woodshed, a glasshouse and the pig sty.

Outside was a deep freeze full of meat, flung over from the neighbour’s house. It would be another 20 days before Brent Willetts could relax enough to sleep properly.

Ten years later, he still remembers a kindness. The following day, 40 members of the Whakatane Rotary Club, of which Willetts was president, turned up for the massive clean-up. “That will stay with me forever.”

– By Jane Phare, Herald on Sunday