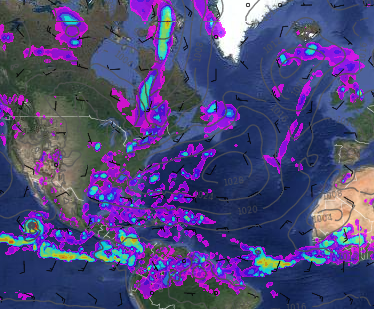 Former Principal Scientist of Weather.com and good friend of WeatherWatch.co.nz Bruce Rose has helped us answer a unique and tricky question – and his answer is quite interesting, especially to the hardcore weather geeks out there.  The question came to us from WeatherWatch follower Matt Talbot on our Facebook page.

“I have spent a lot of time trying to work out longer term predicting. The one thing that has become quite apparent to me is the closeness of our weather patterns to the north east of USA” writes Matt. He says for some reason unknown to him, whatever the winter US north east receives, New Zealand gets a similar winter following.

“ie Winter 2015-16 in The USA was a couple of early dumps then a period of unseasonably warm weather then when January hit and they had a fair bit of snow from then on with the prevailing NE wind flow which is there snow maker.

“Looking at our current winter to date we are following a very similar trend. I have also looked into past seasons and we are very similarly aligned. You may remember the Polar Vortex system that hit the USA last winter 2014-2015. A very cold flow with not a huge amount of moisture but bloody cold,” writes Matt.  “I’m not sure if you have looked at this trend or whether its a complete coincidence”.

So we decided to contact our good friend Bruce Rose, who recently retired from global weather giant Weather.com and The Weather Channel as their Principal Scientist.  Bruce also helped set up the amazing technology behind Wunderground’s forecasts for New Zealand. Bruce’s response about this was very interesting:

“Your reader’s question is a good one,” responds Dr Rose. “Both New Zealand and New England climates have “teleconnections” to El Nino (ENSO) and the North Atlantic Oscillation (NAO) … so it would not surprise me that there is some validity in the qualitative observation that severe New England winters are correlated positively to severe New Zealand winters”.

Bruce goes on to say “I do not know of a specific study in this regard … but here is one comparing climates of New Zealand Alps and European Alps that touch on some of these issues: ftp://ftp.shef.ac.uk/pub/uni/academic/D-H/geog/felix/PAC_Summer_Reading/sturmanandwanner.pdf

“It would be easy to test this hypothesis .. and it might show a correlation .. I encourage anyone to take a stab,” writes Bruce Rose.

So perhaps New Zealanders can keep an eye on the weather in the north east of the United States of America to see if there is any correlation to the same season in New Zealand half a year down the track. If so, that could be quite a helpful tool for forecasters and others who look to seasonal forecasting for business.

A big thank you to Dr Bruce Rose – he’s based in Cleveland, Ohio, where Donald Trump’s Republican Convention is underway this week. Bruce says they’re looking forward to it all clearing out of town!