Home > News > Tonight and tomorrow, will be cold but s...

Tonight and tomorrow, will be cold but system short lived 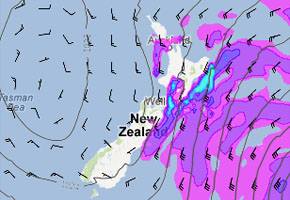 Wintry weather will clear away from Southland, Otago, South Canterbury and other inland areas of Canterbury overnight, expect severe frosts in inland areas possibly getting down to –7 or –8 degrees overnight in the likes of Central Otago. Showers becoming restricted to the coast in Canterbury later with snow flurries possible to sea level in Christchurch however mainly settling above 200m especially on Banks Peninsula. Wintry showers about the coast in Canterbury clearing early tomorrow morning.

Expect cold southwesterlies about Wellington tonight, wintry showers with some sleet possible overnight. Some snow to 200m however amounts won’t be large. Areas of precipitation clearing in the afternoon tomorrow. A few snow flurries to 400m in the Hawkes Bay and Gisborne ranges tomorrow however clearing in the afternoon, accumulations will be quite small and may not settle.

A few snow flurries to 500m clearing about the Central North Island tonight as winds tend more southerly. Becoming quite cold. Showers in other areas of the North Island look like clearing tonight, there may be a few stragglers in the morning tomorrow however they will go and sunny breaks will increase with southerly winds easing during the day.

It won’t be terribly warm tomorrow but Thursday is looking rather settled and pleasant for most of the country. Friday cloud will start to develop in the west of the North Island, on the east coasts of both Islands expect mild temperatures returning with a north to northwesterly airflow developing.