Tomas regains strength as it heads toward Haiti 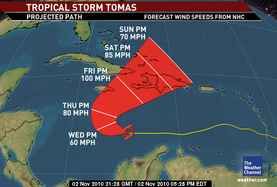 The storm had fallen to tropical depression status just hours earlier, but forecasters anticipated the strengthening and said it might regain hurricane strength.

The official National Hurricane Center forecast track shows that Tomas is likely to make landfall in southwestern Haiti on Friday as a tropical storm, which would mean sustained winds between 39 mph (63 kph) and 73 mph (117 kph), with higher gusts.

Public health officials are especially concerned because of a cholera outbreak in Haiti that has killed more than 300 people and could worsen with the coming storm.

Tomas could dump enough rain for accumulations of 5 to 10 inches over much of Haiti, some of which could cause life-threatening flash floods and mudslides, the hurricane center said.

A turn toward the northeast is expected over the next two days.

With the possibility of landslides, flooding and washed-out roads and bridges in Haiti, the United Nations was scrambling to get supplies to key staging areas on the island, a U.N. spokesman said Tuesday.

“Supplies are being pre-positioned notably in Jeremie, Les Cayes, Jacmel and Leogane, which are expected to experience the storm more severely,” according to Martin Nesirky with the U.N. Office for the Coordination of Humanitarian Affairs.

Tomas hit the West Indies island of St. Lucia as a Category 1 hurricane on Sunday morning and caused major damage by the time its winds subsided Monday night.

The death toll attributed to the storm rose Tuesday to 12, and St. Lucian Prime Minister Stephenson King issued a declaration of disaster.

“No one could have adequately prepared for the event as the hurricane moved very slowly, a mere 8 miles per hour over the country, and deposited two years’ annual rainfall in a 24-hour period,” said June Soomer, an official in the prime minister’s office.

“Roads and bridges have collapsed, schools damaged … homes have been destroyed,” Soomer said. Some towns, including Soufriere on the southwest coast, were reachable only by sea, she said.

But two bridges in the north have been partially reopened so people can get from the fishing village of Gros-Islet to the capital city, Castries, she said.

Aid from the United States and France was expected to arrive Tuesday to help clear roads, she said.

But access to fresh water remained a concern: Soomer predicted that damaged water mains would be “at least halfway back to normal” by the end of the week.

Tomas also caused damage on St. Vincent, where two people were injured when they attempted to fix roof damage during the storm, officials said. The storm sent about 1,000 people into shelters, said Michelle Forbes, acting director of National Emergency Management.