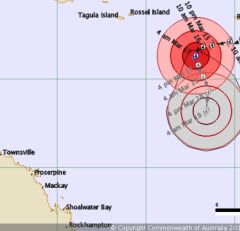 Tropical Cyclone Tomas has been downgraded to a category 3 cyclone after clearing the Fijian islands overnight.  He is now out over open waters and rapidly leaving the island group.

WeatherWatch.co.nz says it’s possible Tomas may bring slightly bigger seas to eastern beaches from East Cape to Gisborne and Hawkes Bay over the next two days however it will be weakening quickly over colder waters.  Cyclones need to feed off warm water to survive.

Tomas has sustained winds of 138km/h and may bring some rain and wind to Tonga, however nothing severe is currently expected there.

The focus now shifts from Tomas to severe tropical cyclone Ului in the Coral Sea.  The intense storm stalled yesterday and this morning is still only crawling southwards at just 5km/h.

The storm, earlier predicted to become a category 5 cyclone, is now predicted to remain category 4 as it slowly treks southwards into the central Coral Sea.

WeatherWatch.co.nz says the computer models all seem to be agreeing on one thing – the cyclone is heading towards Australia and will make landfall there as a significant storm this weekend.

Head weather analyst Philip Duncan says the cyclone should pack a punch when it makes landfall this weekend.  “If the computer models are correct – and the past few runs have all said the same thing – then Ului will hit Australia’s east coast roughly halfway between Brisbane and Cairns”.

Mr Duncan says it could be a category 2 or 3 cyclone when it comes onshore packing sustained winds of over 100km/h and gusts possibly towards 200km/h.   “This could be terrible for crop growers in the region.  We’ll need to wait for another day or two to see if Ului will hit any large populated places”.

At this stage the biggest centre in the projected path of this cyclone will be Rockhampton, with a population of 75,000 people.  Other centres that are nearby are Bundaberg, Gladstone and Mackay.

“It’s worth pointing out that cyclones can change direction – this one is proving to be very slow moving which makes predicting an area of landfall very difficult” says Duncan.

Residents between Brisbane and Townsville and those in New Zealand with relatives or friends in this area are advised to stay up to date with the latest warnings and news on Ului as landfall details are likely to change as forecasts are fine tuned over the coming days. 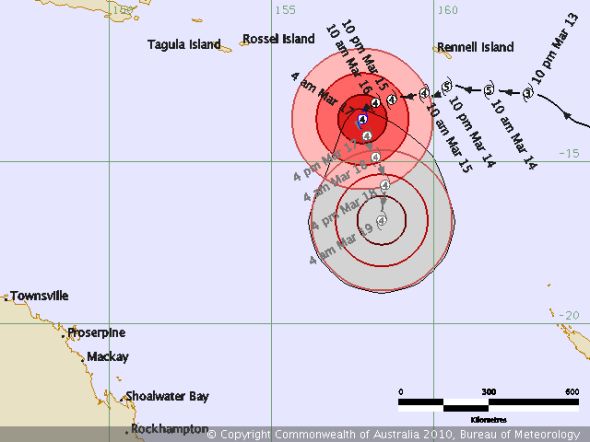 Probably wont arrive now,be this high in the tasman sea,should this one dissapates next week it should be replaced by another stalled tasman high.

Hi there, What day is it predicted to hit the QLD coast?

At this stage late Saturday or Sunday…although it’s worth noting that this storm has stalled…and is only moving at 4km/h at the moment…slower than walking speed!  It may arrive later than the weekend… but at this stage we’re going with Saturday night or Sunday.

A lot of uncertainty with this storm, so check back for updates as to its predicted path.