Today’s roundup of how it’s going 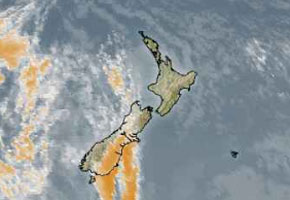 The North Island is still mainly trapped under anticyclonic gloom with light winds, a few showers are affecting coastal areas mainly around northern Taranaki. South of Hawkes Bay on the east coast the weather looks quite sunny with highs around 13 to 14 degrees currently and light winds.

The western coastline of Manawatu and Wellington is getting some cloud about now which is a little earlier then I expected but shows the north to northwesterly airflow is picking up in the area. Under the cloudy gloom high’s appear to be around 11 or 12 degrees although currently it is 14 in Auckland and 15 degrees in the sunnier parts of Northland.

The South Island looks to be running to schedule. Cloudy on the West Coast with showers moving in and northeasterly breezes, temperatures currently around 10 degrees in Greymouth and Hokitika.

High cloud is increasing along the east coast with light northeasterly breezes on the coast, winds tending warmer northwesterly inland. Where the northwesterly breeze or influence if you like hasn’t reached yet the temperature is actually quite cool as the thick high cloud isn’t letting the sun in while some other areas where the breeze has reached are sitting on 14 to 15 degrees right now, it does show the fickle nature of forecasting temperatures at times. This may be the case around Dunedin at the moment where some places are quite cool while others that have a NW breeze the temperature is higher.

Southland looks to be breaking into some sunnier weather at the moment coming in from the west as high cloud pushes out of the way, should lead to a nice rest of the day down there while the sun is out with northwesterly breezes, currently it is sitting on 14 in Invercargill.

It is freakishly calm out here in Army Bay – for the last few days very little bird noise, the sea absolutely still, hardly a breath of wind. Is there something looming methinks environmentally – perhaps not just the weather??