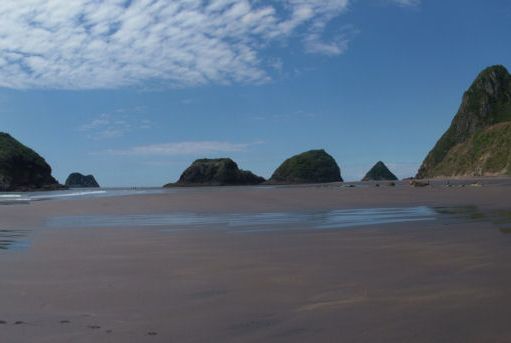 A high pressure system in the Tasman Sea is set to push temperatures back into the 40s across South Australia and Victoria today while at the same time sends a cold south west change across New Zealand predicts WeatherWatch.co.nz.

Temperatures in Australia, including Melbourne, are again expected to hit 40 degrees Celsius on Thursday, while at the same time across the ditch back home parts of Southland and Otago will only reach 14 degrees.

“The high is in the Tasman pulling down warm northerlies over Australia from the tropics, across the desert and into Melbourne.  That same air flow then travels more than halfway to Antarctica, cooling down significantly before doing a U turn and coming up to the South Island in the form of a cold sou’wester” says head weather analyst Philip Duncan.

Cold winds will push over the South Island across Thursday and into Wellington later.

“The North Island will also have the south west change later on Thursday and into Friday but it will be more refreshing for many regions in the north, rather than cold”.

Conditions are also likely to be windy at times in many regions over Thursday and Friday.

Australia’s heat will make it to NZ this weekend but it will be watered down.  “The flow isn’t perfect from southern Australia to New Zealand but Canterbury and other eastern areas further north will make it into the mid to late 20s this weekend, with a few inland areas hitting 30 as the brief nor’wester moves in”

WeatherWatch.co.nz says the very unsettled weather pattern this week will be replaced by a calmer one next week – however a nasty storm in the Southern Ocean this weekend could again see more wind and rain for southern and western parts of the South Island.

WeatherWatch.co.nz is also warning residents north and east of Taupo to expect little in the way of rain for the rest of January.

Lol, considering that from Christchurch down is supposed to be similar temps, your headline is a shocker. Besides, I’ve been in Melbourne when it’s been 41, I’d much rather a 14!

Simply a fact that 14 is the high for Invercargill – – and like you say, 14 is better than 41!   It’s not a negative just because we’ve happened to mention where you live!  Someone has to live in the coldest place today.

True but it looks the 14 achieved in Ingill, Chch and Dunedin wasn’t the coolest of the day after all. Even got the washing dry this afternoon!