Timeline of stormier weather moving in: Starts tonight in the North 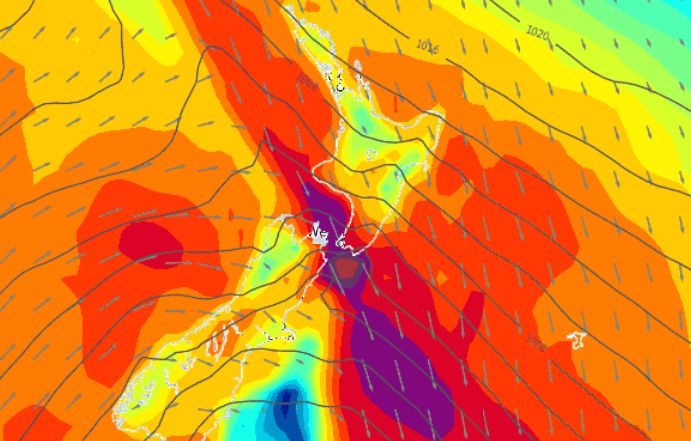 A week of even windier weather has already begun for some areas across the country and later today it will ramp up across the upper Norh Island especially.

FRIDAY
Winds across Friday PM will build and tonight gales, potentially with isolated pockets of damaging gusts, will affect regions most exposed to north to north west winds.

Winds tonight will spread to most North Island areas..

However while the windy weather moves into the North Island today, the South Island returns – briefly – to calm.

SATURDAY
Saturday looks blustery over much of the North Island, especially northern and eastern areas along with the South Island’s West Coast and inland parts of the Southern Alps. Gales are again expected in Auckland.

But in the Deep South strong to gale force winds will start to build – then about the Southern Alps may reach hurricane force later in the day – and this may spread east.  One to watch.

MONDAY – Stormiest day
While gale force winds will pop up within the next 24 hours in some areas it’s Monday that we believe a spring storm will move in with damaging winds quite possible.  Both WeatherWatch.co.nz and government forecaster MetService have confidence of severe gales about the South Island and central New Zealand on Monday.

WeatherWatch.co.nz believes some inland areas of Canterbury and amongst the Southern Alps could see damaging hurricane force winds sustained at over 130km/h.

In fact on Monday PM it’s possible Wellington and exposed parts of Central New Zealand could be exposed to damaging winds above 140km/h.  “Our computer models and clearly the models used by the government forecaster are all indicating Monday could be a fairly stormy day for parts of New Zealand” says head weather analyst Philip Duncan.  “This is one farmers, authotiries, airlines, airports and travellers should be aware of”.

Mr Duncan says it’s still too early to “lock in” the wind speed predictions but says based on modelling over the past few days it all points to a burst of severe spring winds on Monday afternoon and then easing rapidly on Tuesday.

“This looks to be very sharp and about a day to half a day long, so fairly short. Within 24 hours most places should be calmer again but winds could be severe enough for a time in exposed areas to cancel flights, make driving dangerous and cause some powercuts”.

WeatherWatch.co.nz says the weather patterns in mid-October are incredibly changeable and a shift in the lows and highs, even by a small amount, could shift the intensity of the predicted winds and the wind direction.  “The forecasts used in this story are based on several days of computer models all pointing towards some pretty windy weather in the coming seven days across New Zealand”..

How stong will the wind be at Whakapapa on Sunday? Do we go skiing for the day or stay home and watch Bathurst??? Such decisions!

Sunday may be ok. Winds will be strong from the southwest in the morning (45 kph and over), a slim chance of gusting to gale at times up on the mountain but winds ease in the afternoon to a brisk west to northwest wind (40 kph and under). Expect sunny spells and some cloud.

Thanks WW – sounds like it might be a bit too windy to take the young one up the mountain although fine, will watch Bathurst instead – go Holden!

It sure isn’t too great in Hamilton today. Hopefully Sunday we may get some relief from these constant winds & rain.

Maybe next weekend things will improve a little, it looks quite good from Wednesday on??

Keep up the great work guys

Wednesday onwards does look better although Wednesday itself may be a bit cool with southwest winds. Thursday starts to get warmer, winds from the west then Friday looks good with northwesterlies and mostly sunny conditions 🙂

2013 the year of violent storm force or hurricane force storms. Taken so many pix this year of damage from high wind. I’ll be using WW as my main forecaster for this lot as we don’t normally get warnings despite being well known as getting NW rampages at times. Sux where we live for that. Paraparaumu’s sheltered by Kapiti Island, they can be 55km, us >100km. If a hurricane force NW hits at 140 odd km, then we can expect storm surge as the wind will blow it in regardless of the swell. If it turns to low pressure (S) here to get up the hill at that speed, we’re in stook. NW comes straight into Paekok as a direct hit. One struck us gusting to 130 km last year unwarned, causing damage and flooding with the driving rain. NW and its opposite the SE can roar through here. We’ve already had an NW this month that tore down big tree branches, threw a trailer down a bank and damaged the surf club, as well as burning June survivors with salt. The NW’s are odd here, some fire straight up over the hills and in the main leave us alone, while others are low level and come straight into us. NW before the S’s are the ones that cause trouble. If an N trough is thrown into a NW, then we get nasty shear with meso-style rotation. I braved photographing the 130 km/h NW storm and the massive rotation and meso syle shelf forming from shear in 2012, but not sure if I want to brave that again, it was pretty unpleasant. Had to hunker down between parked cars so I wouldn’t get blown across the street and then bolt from pole to pole along the beach front. What’s new! If its a hurricane force N, than I’ll be expecting terrible katabatic and cross winds/shear.

Saturday will be our stormiest day of the ones above.