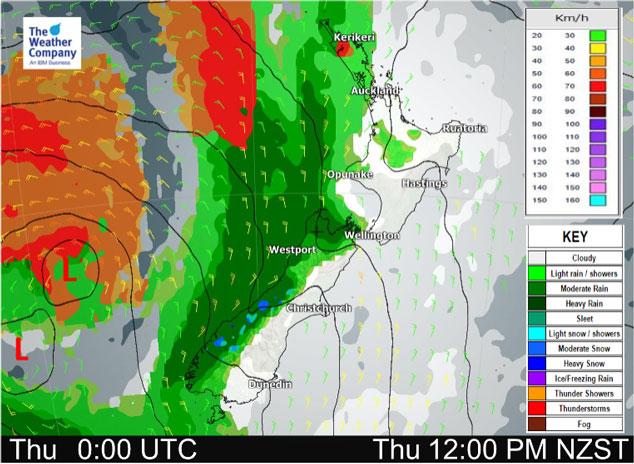 A north to northeasterly airflow lies over New Zealand today, a front curling into a low in the Tasman Sea pushes into the West Coast of the South Island then the western side of the North Island later on.

Northland, Auckland, Waikato & Bay Of Plenty
Mostly cloudy, a risk of morning fog about the Waikato then breaking away. Chance of a light shower otherwise mainly dry. Showers becoming a little more persistent about Northland in the afternoon then elsewhere overnight. Northeasterly winds.
Highs: 16-17

Canterbury
Plenty of high cloud, rain becomes persistent about the high country in the evening. A few spots of rain may reach the coast overnight. North to northeasterly winds.
Highs: 14-17

Southland & Otago
Mostly cloudy, chance spit of rain in the evening otherwise mainly dry. Rain spreads from the west into the Central Lakes District (i.e. Queenstown etc) during the day then easing at night. North to northeasterly winds.
Highs: 12-13