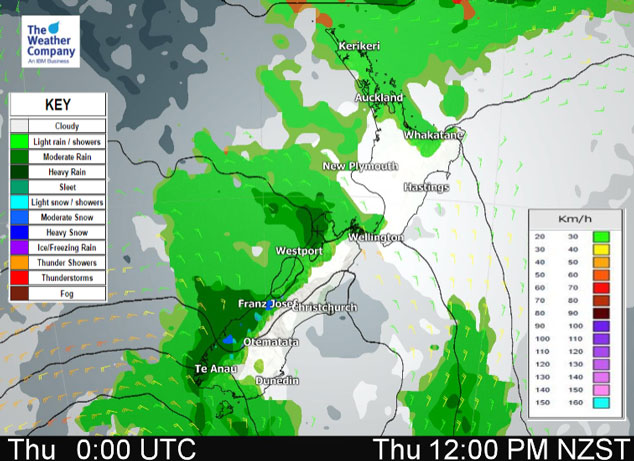 A few frontal zones push into the western side of New Zealand today bringing some wet weather, looking mainly dry out east.

Northland, Auckland, Waikato & Bay Of Plenty
High cloud, the odd spit or light shower possible. Some rain moves into Northland during the afternoon reaching Auckland through to Coromandel in the evening, the bulk of the rain may stay just offshore from Auckland affecting Great Barrier Island etc. Northeasterly winds.
Highs: 17-21

Eastern North Island
High cloud, some sun may break through at times otherwise high cloud is looking to be fairly extensive. Light winds tend to the north.
Highs: 19-22

Marlborough & Nelson
Mostly cloudy, a few spots of rain develop in the morning then clearing in the evening. Rain may be a bit more persistent about the Sounds and Tasman. North to northwesterly winds.
Highs: 17-19

West Coast
Mostly cloudy with a few showers or the odd spit, heavy rain moves into Fiordland in the morning then slowly pushes northwards however it runs out of puff with heavy rain not reaching North Westland. Light winds tend west to northwest in the afternoon.
Highs: 15-17

Southland & Otago
Early spots of rain for Southland then some sun breaks through as northerlies tend northwest, a few further showers / spots of rain late afternoon. Otago is mainly dry, some high cloud then breaking away in the evening, northwesterlies. Coastal Otago may see some afternoon mid level cloud as light winds tend southwest.
Highs: 14-17