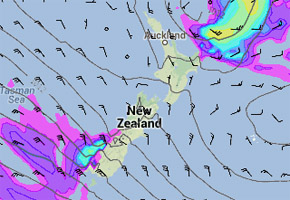 A ridge of high pressure moves over the North Island overnight while a westerly airflow slowly begins to increase again over the South Island ahead of a front in the south Tasman Sea. Generally conditions overnight for most of New Zealand are looking to be settled apart from the far south.

Auckland & Northland
Mainly clear skies tonight with light winds. There may be some cloud about eastern Northland. Chance of a fog patch or two overnight.
Lows tonight: 7-10

Eastern North Island
Clear skies develop about the Wairarapa, some cloud about Hawkes Bay which clears towards dawn tomorrow. Cloud for most of the night about Gisborne where there could be a drizzle patch or two.
Lows tonight: 6-8