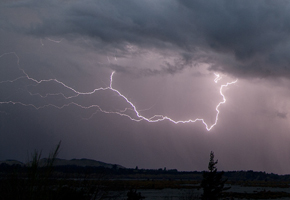 A slow moving low pressure system is bringing showers to many areas this evening about the North Island, anywhere north of the Wellington region and south of Northland could see thunderstorms. Conditions ease overnight. For the South Island it is fairly calm once again after a sunny day in the far south, a few showers catch Marlborough however clearing overnight.

Northland
Showers, some may be heavy then easing later this evening becoming few and far between overnight. Showers may become heavy again later in the night about the northwest of the region. West to southwest winds.
Tonight’s Low: 11

Central North Island, Waikato, Bay Of Plenty
Showers, some heavy with possibly thunderstorms and hail then clearing later this evening for inland areas, the odd shower hanging about the coast through Bay Of Plenty. Skies clearing up overnight inland with the chance of some fog. Easterlies ease later this evening.
Tonight’s Lows: 8-13

Canterbury
Mainly clear skies overnight although there may be some cloud from later this evening north of Banks Peninsula. Chance of a drizzle patch overnight from this cloud also. Northeasterlies brisk about the coast east later.
Tonight’s Lows: 10-12

West Coast
Mainly clear skies with southwesterlies near the coast easing this evening. Some cloud north of Westport.
Tonight’s Lows: 9-10