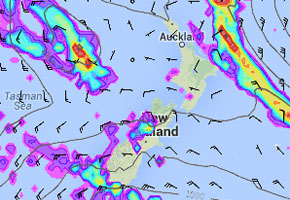 Our wind causing, rain drenching front moves off to the northeast of the North Island overnight leaving behind gradually increasing clear spells. Chance of a fog patch or two by dawn however in some areas. In the South Island a westerly airflow leaves the east dry and cool, in the west and south the odd shower continues.

Auckland & Northland
Areas of rain gradually clear this evening with northwesterly winds easing. Winds change light west to southwest overnight with some cloud, chance of some fog about Auckland especially in the south by dawn.
Lows tonight: 9-11

Western North Island
West to northwest winds with some cloud, chance of a shower about the Tararuas and northern Taranaki.
Lows tonight: 7-8

Canterbury
Mainly clear skies, easterly winds near the coast ease this evening. Could be a frost by dawn in some areas.
Lows tonight: 1-2

Coastal Otago
Mainly clear with westerly winds easing off a bit this evening but still puffing through overnight.
Low tonight: 4

Southland
Some cloud with the odd shower clearing later this evening for a time. Brisk westerly winds. Towards dawn tomorrow showers pick up again.
Lows tonight: 3-4