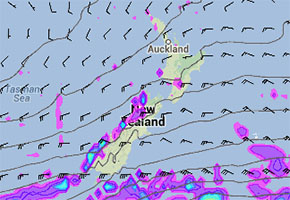 A west to southwesterly airflow lies over the country tonight with showers at times in the west (especially for the South Island) and dry clear conditions out east.

Eastern North Island
Clear skies, westerly winds ease this evening for most but may remain fresh for the Wairarapa.
Lows tonight: 4-5

Central Otago
Mainly clear with some cloud, west to northwest winds. A shower or two is possible towards dawn tomorrow.
Low tonight: 1