Thunderstorms – why don’t we always get them when forecast? 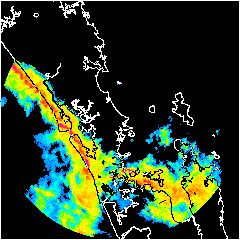 Occasionally we hear in the forecast that there’s a risk of thunderstorms developing… but in the end they never arrive.

We spoke to MetService Weather Ambassador Bob McDavitt, to get a full understanding of how to interpret the thunderstorm risks – and to explain the difference between a thunderstorm outlook, watch and warning.

“Making thunderstorms is something like popping corn. All the ingredients have to join together in the right way before anything will happen, and then they pop in a random fashion, but not all the corn will pop. Thunderstorms act slightly differently because they can interact with each other but the analogy may be useful.

The regions outlined in the MetService Thunderstorm Outlook are drawn by experienced and skilled meteorologists taking into account computer guidance and watching where the ingredients are coming together. Once an area for potential thunderstorms is identified, the forecaster then has to assess the period over which the storms are likely to be active and what significant weather may be associated with the storms. We are watching for strong wind, heavy rain, hail, and the potential for tornadoes. A decision has to be made about the risk (likelihood) of the thunderstorms occurring. Due to a combination of all these factors, there maybe many regions drawn, although in complicated situations the outlook picture may have to be simplified to clearly show the likely outcome.

The regions we draw are thus useful in that the boundaries demark these differences, but within each region there will be some places more prone to thunderstorms than others. Within a region it can be that only one or two thunderstorms eventually pop – in low risk regions the ingredients may or may not come together. Even within a high risk area, the nature of thunderstorms means that it is not certain that everywhere in the region will experience a thunderstorm.

Sometimes the risk region may appear large because one of the ingredients covers a large area…overseas they often draw risk regions that would be as large as the whole of New Zealand.

When we have sufficient information to have high confidence that some of the thunderstorms likely in the next 12-24 hours may be SEVERE, we start a Severe Thunderstorm Watch for the region. This service is provided on a 24 hour basis for all parts of New Zealand as part of a contract to the New Zealand Government.

The criteria for a severe thunderstorm are:

* Rainfall of 25 millimetres per hour, or more.

* Hailstones 20 millimetres in diameter, or larger.

Historically, severe thunderstorms occur in New Zealand around once a month. During summer, these events are more likely in eastern and inland areas during the afternoon and early evening, helped by the warm daytime temperatures. However, severe thunderstorms can occur at anytime associated with frontal features, with a slight prevalence to western areas of both Islands.

These bulletins only have a lifetime of a few hours This service can only be offered to places within 150 kilometres of and in clear view of a MetService radar , but we may extend this to 180 km if we get a clear enough signal. Some damaging thunderstorms may go undetected even when
close to one of our radars, but the good news is that the MetService radar network continues to grow.

Auckland City is on an isthmus. Showers that move onto the Auckland region from elsewhere are likely to dump their load on nearby hills or sea rather than the CBD, and these events may be stored as selective memory. Depending on the time of day and the season of the year, if the land is cooler than the nearby sea this tends to kill the buoyancy needed for a good thunderstorm. But we need to be aware that sometimes a convergence zone may form right over the isthmus, and in those cases the most intense rain may be near the city. For many years Whenuapai held New Zealand’s record for hourly rain intensity at 105 mm/hr.

About time we had a really good lightshow with wind and rain. While I am not a fan of either wind or rain they generally tend as like when thunder and lightning are in the mix. Having spent time in some of the worlds tropical countries where thunder and lightning are thought of as nothing other than nuisance or an every day occurrence, I am still fixated and fascinated by this natural wonder and in one instance spent hours just watching in Singapore. The people I was visiting at the time must have thought I was completely mad being so transfixed on the lighting. While I was attending a meeting I bolt of lightning raced across the exterior of the building with a blinding flash and the crack of a high powered rifle but did not phase the attendees of the meeting but I might as well have been struck by it myself….it was truly a fantastic event. We in NZ have no real appreciation of this beautiful natural demonstration of high energy physics at its most basic level….Most forget it is the basis for research by Ben Franklin and Nicola Tesla, common names in todays world but interestingly still holds a degree of mystical and misunderstood science by most. A truly beautiful thing it is, it remains unharnessed and largely wasted as a form of free energy….one of these days a Ben Franklin of our time will have a brainwave and figure out a way to extract the latent energy.

Good article there from Bob.
I wonder in forecasts, and other people possibly too wonder, what is the difference when they say ‘heavy rain, sometimes thundery’ for some areas and ‘isolated thunderstorms’ for other areas ?
What’s the difference between the two?
Would thundery rain cover a general area, where as an isolated thunderstorm cover a particular area?
To me, thundery rain means it is really going to p***s down, as in noise on the roof, not a very good term. Why not use ‘rain from a cloud with a flash or two’?
I must add, thunderstorm forecasts are labelled as a RISK, so because of that, thunderstorms should not happen to what is forecasted.

I still remember the night of the Pacifier (shihad) concert at the powerstation in Auckland ( circa 2002- 2003) when Auckland was hit by an intense thunderstorm that truly was citywide, and it lasted for hours! I even remember around 1987-1988 when the North Shore had a big thunderstorm at night; and we had a powercut which made it all the more exciting. Storms like that I will never forget!.

Shihad or the thunderstorm.

What would be the perfect ingredients for a good Auckland Thunderstorm??

We find our best thunderstorms often move in from the west or north west – a front like tonight’s front is ideal.  But thunderstorms are often isolated…so while South Auckland might get hit, the central city might not.  Always a tough one to get the whole city affected.

In Summer sea breezes cause cloud build ups which can cause severe thunderstorms which don’t move very quickly.

Ideally, I prefer an active front like this, rather than a big low (like we had at Queens Birthday).  Seems to be more fire in the belly with these cold fronts slamming into mild air.

Hi there, I can understand why its hard to get them right, How ever I have to ask… I see on the Met service web page they are saying thunder in Tauranga, right now its fine and sunny (a lovely day @ 11:45am)

whats the chance of thunder today???

We’ve just removed the chance of showers from our forecast for Auckland… just doesn’t seem to have the right set up at this stage.  Also not seeing any coastal cloud build ups.  I think we need to wait until later this afternoon to see where the clouds start to ‘explode’…but i’m thinking Tauranga will be thunder free today.