Thunderstorm risk across NZ this afternoon/evening 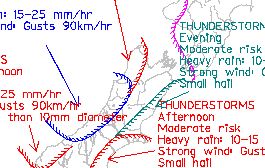 A cold front is today moving up the South Island bringing a brief wintry change behind it – it’s likely to reach the lower North Island tonight.

The government forecaster says there is a moderate risk of thunderstorms triggering as the front and cold southerly change moves over north Otago and southern and central Canterbury in the afternoon, and north Canterbury and the Kaikoura coast in the evening.

Thunderstorms are also possible over the lower third of the North Island.

Check out the free and live Lightning Tracker.

“Any thunderstorms that eventuate in these areas are likely to bring localised heavy rain up to 15mm per hour, small hail and strong squally winds gusting around 100 km/h” says the forecaster.

“There is a low risk of a few thunderstorms also from southern Fiordland to Dunedin during the afternoon but the risk is moderate in the Clutha area going into the evening as the coldest air aloft passes by”.

The government forecaster predicts there is a low risk of a few thunderstorms in the band of rain with the front in Taranaki, Kapiti coast, Wellington and southern Wairarapa at night.