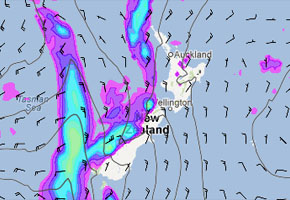 As an anticyclone slips away to the east of the country and a new weather system approaches from the west the weather around the country is set to deteriorate over the course of Tuesday and Wednesday, some parts around the country are already experiencing this especially after the sunny settled weather we had over the weekend.

WeatherWatch.co.nz analyst Aaron Wilkinson mentioned last week on Wednesday the possibility of thunderstorms for some parts of the country mid this week as unstable air was looking to move over New Zealand. Mr Wilkinson mentions, “As talked about last week thundery conditions did look possible mid this week with some unstable air on the way, this is still holding true for some and from Tuesday evening and into Wednesday morning the West Coast of the South Island should receive some thundery weather with heavy rain”.

On Wednesday there is a risk of thunderstorms in the east of the South Island mainly in Canterbury with a southwest change in the afternoon, another risk presents itself on Thursday for inland parts of the South Island north of Canterbury in the afternoon and evening due to some convection and warming of the land by the sun. Storms are unlikely to be severe however and for both days the risk of storms actually happening is generally low.

Thunderstorm risks for the North Island are low also, a chance does present itself over Northland on Wednesday then on Thursday afternoon afternoon convection may bring a few heavy showers to eastern parts of the North Island.

There is a threat of heavy rain about the North Island on Wednesday mainly from Taranaki across to the Bay Of Plenty northwards as the frontal system from the west closes in, western Bay Of Plenty may be an area where the heaviest falls are likely to occur. Overall though warning criteria at this stage has a low chance of being met but Mr Wilkinson mentions that it is advised to keep up to date with the latest forecasts.