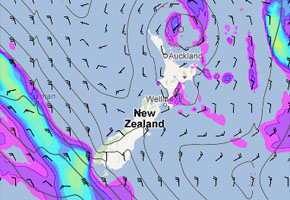 Winds will tend southwest for most areas and there will still be some cloud but sunny breaks also, the odd shower may be around too south of about Auckland clearing by late afternoon however it should be dry for the most part. Temperatures will be rather nice tomorrow so it will start to feel a little more summer like.

The South Island will see an increasing northwesterly airflow develop especially over Southland through to Canterbury. Weather will be sunny in the east with high cloud about Southland and Otago spreading into Canterbury during the day, expect cloudy skies about South Westland and sunny breaks the further you go into North Westland. Temperatures will be mild tomorrow in the east especially inland as right on the coast it is still likely to be fairly northeasterly while not far inland winds will tend more northerly or northwest.

Sunday sees a fairly pleasant day ahead for the North Island with westerly winds and some cloud increasing from afternoon mainly in the west. The South Island’s east coast will be nice and warm with northwesterlies, expect high cloud too. Rain and showers will work there way up the West Coast as a front from the southwest closes in. Monday sees the flow change to the southwest and it could get interesting in terms of thundery weather mainly in the South Island, perhaps about Wellington and the east coast of the North Island overnight and into Tuesday also.