This week: Starts off calmer, but July could end with big polar blast 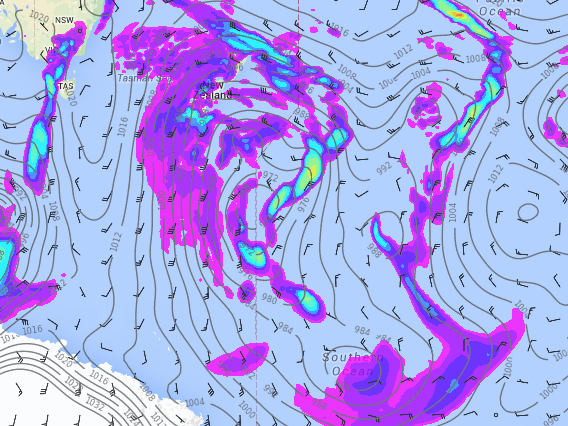 It’s still a bit windy for some areas today but compared to the weekend Monday is a much calmer day across the country as gales finally blow out to our east for the most part, and showers ease.

The colder change yesterday saw polar air swiping just the deep south and into Otago but today that is already a thing of the past with the air flow returning from Australia again – which means temperatures will remain slightly above average in many places tonight and into Tuesday.

On Tuesday a period of North Island rain and showers moves through with winds continuing to become lighter – or even dying out – towards the end of the day.

By Wednesday high pressure north of New Zealand will see mostly settled weather for the upper and eastern North Island but showers do affect the west coast while rain returns to the South Island’s West Coast with heavy falls – and at the same time it’s mostly dry in the east with brisk nor’westers kicking in again.

By Thursday New Zealand is back to the windy and wet weather with rain right along most of the nation’s western coastline of both islands and strong to gale force westerlies blowing for many regions, so it’s not overly cold.

On Friday a cold southerly will return to Southland and Otago – but only briefly. Friday sees winds turning more westerly across the day over the country ahead of the next big system coming in for the weekend.

JULY’S LAST WEEKEND COULD BE POLAR:
The last weekend of July is this weekend and finally New Zealand looks exposed to a nationwide polar blast for the  first time this winter, but we still need a couple more days to lock it in – there air pressure systems are definitely moving around pretty quickly at the moment so things might change a bit.

However latest guidance suggests air from around Antarctica looks set to surge northwards as a big, windy and cold southerly airflow covers the entire country.

The first day of August looks very cold for some – with a chance of snow to low levels, possibly sea level.

While the models look pretty sure of a big southerly, the fast moving nature of our spring-like winter weather pattern means any cold snap may be short lived – with the air flow over New Zealand potentially switching back from Australia again by the end of August 1st or start of August 2nd. So it’s one to watch – and we’ll keep you posted this week as we firm up where any snow might go and where the coldest weather might be.