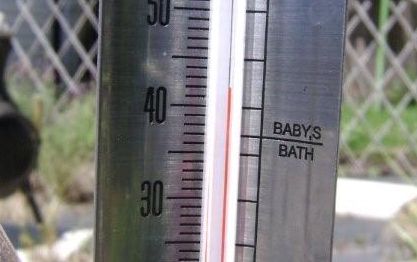 On this day one year ago an extreme heatwave was hitting Australia with temperatures over 40 degrees.

Here’s the story we ran this day last year.  (And if you want to see other historical news stories, simply go to our Archives section).

Temperatures reach the Mid-40s in Australia

Vast tracts of South Australia are this morning preparing for another baking day of catastrophic fire risk after authorities closed schools, advised people to leave danger zones and called in water-bombing aircraft during yesterday’s 40C-plus temperatures.

Fires did break out in the tinder-dry country around Coober Pedy and Roxby Downs to the remote northeast of Adelaide, and in country between the Flinders Ranges and Port Augusta, but by late afternoon they had been contained.

The risk is that as temperatures again soar into the mid-40s today, fires that do erupt will rage out of control, threatening lives and destroying anything in their path as they are driven by hot, strong winds.

Conditions were worse yesterday than predicted, with the fire danger rating in the Flinders and northwest pastoral districts peaking well above the trigger level for the catastrophic rating.

This is the first time the rating – devised after February’s Black Saturday fires in Victoria – has been used, and warns of conditions every bit as bad as those that killed 173 people and destroyed entire towns.

The rating warns that any fires are likely to be fast-moving, uncontrollable, unpredictable and likely to kill anyone in their paths.

Fire authorities advised people to evacuate if they were not well-prepared for a potentially disastrous fire, and to ensure that the elderly left early.

“They will be very, very dangerous fires.”

CFS strategic services manager Mick Ayre told ABC radio that the best advice fire authorities could give was to think carefully about the ability to fight a fire in catastrophic conditions.

“If you’re not comfortable and if you don’t have the right equipment and if your property is not prepared, it’s better to go and do something else like go to the beach or the shopping centre than it is to take the risk of defending your property or escaping at the last minute,” he said.

“If you decide to stay, you could die in the attempt to save your property.”

As the state sweltered in temperatures that reached 44C in some areas, Adelaide endured a peak of 41C, following its first recorded official November heatwave last week.