Home > News > Think our winter is bad? Spare a thought...

Think our winter is bad? Spare a thought for Kuwait – at 53C, a new record breaking temperature! (+PICS) 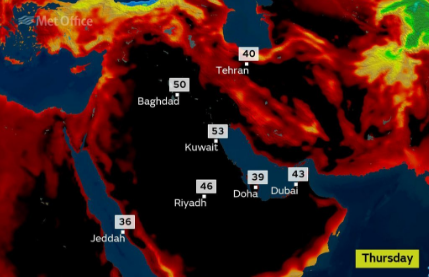 In the middle of winter it’s an unfathomable idea for some, but temperatures in Kuwait reached 54C last week, a record for the eastern hemisphere and possibly the entire planet.

A weather station in Mitribah, an unmapped area of north-west Kuwait, recorded the temperature on Thursday, with Basra reaching 53.9C (129F).

The record has yet to be confirmed by the World Meteorological Organisation (WMO), which still has to receive the actual data from Kuwait’s meteorological department.

The highest temperature ever recorded was in Death Valley, California, where the mercury is said to have risen to 56.7C on 10 July 1913. However, the validity of that figure has been debated by meteorologists.

Temperatures in Kuwait and Iraq reached 129.2F this week, the hottest ever recorded in the Eastern Hemisphere. https://t.co/GE83SMu34Z

You know it gets hot in Kuwait when 100 [F] degrees feels nice :^)
The precise location of Mitribah is not clear. Weather station 40551 appears to be close to Camp Buehring, a US army base 40 miles from the Iraq border and close to the Udairi Range complex, a military training facility.

Few people, apart from US service people, live in the area. Bedouin shepherds and camel herders are the only other inhabitants, and are seen by soldiers wandering through the firing ranges and abandoned vehicles that litter the landscape.

Soldiers stationed in Kuwait made occasional forays on to social media to complain about the heat. Christan Reyes tweeted: “You know it gets hot in Kuwait when 100 [F] degrees feels nice :^). the last few days it was mid-120s.”

According to the UK’s Meteorological Office, the Mitribah weather station is automated. “It’s very unlikely that the site has a human observer,” a spokesman said. “Information from the station should be relayed directly to the main office. But it is a proper WMO station.

The hottest day EVER is recorded in Kuwait as temperature soars to 54C https://t.co/lwYrh9nyAI

“There was an issue with the sensors in 2010 but that seems to have been fixed.”

Previously, the record was held by Aziza in Libya, with 58C, but the WMO later disqualified this as unreliable because the weather station was manned by an untrained observer and was located in an area that was unrepresentative of its surroundings.

Quite how human beings can survive such extreme temperatures without the aid of air conditioning is hard to imagine.

Heatwaves reaching just 45C have led to hundreds of deaths. In 2015 an estimated 780 people died in Karachi, and in Delhi hospitals often struggle to cope with the number of heat-stroke cases.

The dryness of the desert air is probably crucial for the Kuwaiti Bedouin. Humans can cool themselves with sweat and by sheltering from direct sunlight. In humid conditions, skin is unable to shed heat quickly enough through evaporation.

In Iraq a new temperature record for two consecutive days was set at Basra airport, registering 53.9C last Wednesday and Thursday. The Iraqi government responded to the sweltering conditions by closing all government offices.

The soaring temperatures have caused significant problems for the refugees who fled the fighting at Fallujah.

UN spokeswoman Caroline Gluck said refugees at camps in Habbaniya and Amiriyat al-Falluja were only able to sleep for one or two hours a night.