Think it’s wet in New Zealand? Try 331 days with rain in the USA 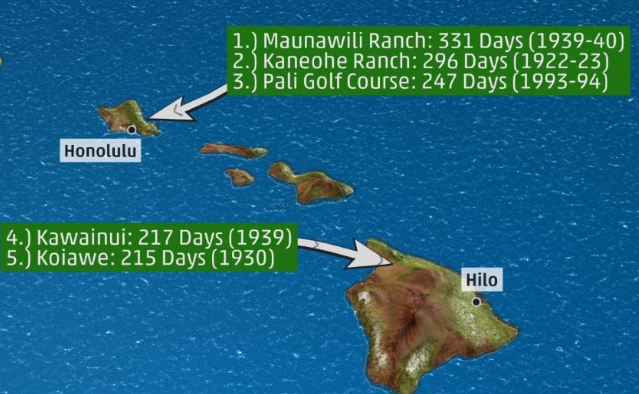 A week in a row with rainy conditions is bad enough, but could you imagine being in a location where measurable rain has occurred hundreds of days in a row?

Windward-facing locations of Hawaii are one of the United States’ prime locations for persistent rainfall day-after-day, and where the record for most consecutive days with measurable rain is held.  From 1939-40, Maunawili Ranch on the island of Oahu saw 331 straight days with measurable rain, according to Brian Brettschneider‏, a climatologist with the University of Alaska-Fairbanks and the Western Regional Climate Center (WRCC).

In meteorological records, measurable precipitation is defined as 0.25mm or more of rain and/or melted snow on a given day.

The top five locations that have seen the most number of days with measurable rain in a row. (Source: Western Regional Climate Center/GHCN-D)

Another incredible rainfall record in Hawaii is a location on the Big Island that once saw 881 straight days with at least a trace of rain. A trace is a small quantity of precipitation that can’t be measured.

Brettschneider compiled the information on the Hawaiian rainfall streaks from the Global Historical Climatology Network – Daily (GHCN-D) and said the streaks were previously unidentified records.

You can see this pattern on the map below with elevated windward areas shaded blue receiving more than 4.3 metres of rain annually. Some locations are estimated to have annual rainfall that exceeds 7.6 metres. Conversely, the dark red colored leeward locations see 200 to 760mm of rain annually. [It’s worth noting Fiordland in New Zealand can have over 14 metres of rain per year and is one of the wettest places on earth]

The greatest precipitation totals ever recorded in both one month and one year in the United States occurred in Puu Kukui on the island of Maui, which is located in a favorable windward mountain location.

Average annual rainfall quickly tapers off from 9.4 metres (9398mm) at Puu Kukui to less than 760mm near the lower elevations at the coast, which reinforces that elevation plays a huge role in enhancing rainfall at this site.