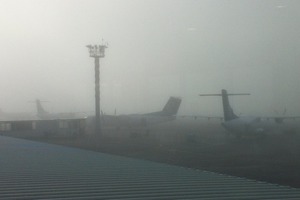 Thick fog has blanketed Sydney, disrupting flights, ferries and motorists across the city.

Many flights have been grounded at Sydney Airport with some incoming services diverted to other cities.

Sydney Ferries has suspended all services and advised passengers to catch the bus or train.

Meanwhile poor visibility has also impacted on several highways, including the M1 and M4, with drivers urged to slow down.

A high-pressure system off the coast, coupled with moisture with light winds and clear skies overnight has reduced visibility.

Neil Fraser from the Bureau of Meteorology said fog like this occurred about three times each year.

“At the moment the airport’s got a decent north westerly blowing, about 13 kms an hour.

“It forms elsewhere and then drifts across to the airport.”

The M4 is also affected in both directions around Prospect and Eastern Creek.

Drivers have been urged to take extra care on the Hume Motorway and Hume Highway between Campbelltown and Liverpool in both directions.