The windy week ahead 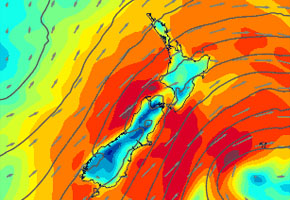 This will certainly be a windy week for some regions as spring westerlies dominate for what looks like the next week or two. WeatherWatch.co.nz forecasters note that on Wednesday evening northwesterly winds are likely to build and become strong about northern parts of the South Island and Cook Strait, gale northwesterlies are mainly likely about the Strait itself.

There will be areas of rain however rain warnings are not looking as likely as wind warnings are, a period of heavy rain may move through western parts of both Islands on Thursday then again over the weekend.