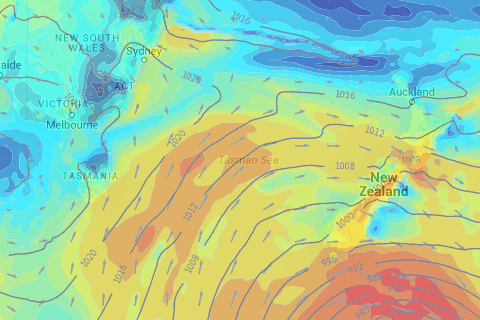 After weeks of rough winds, we’re finally looking at a calm outlook for the country, though the west to southwesterly airflow sitting over most of NZ will lower temperatures in eastern regions.

The eastern North Island will cling on to warmer temperatures for most of tomorrow though, with those further south likely to notice it more.

Much of the North Island sees west to southwest winds, with showers at least for some part of the day
The East Coast is mainly dry with northwesterlies, though towards evening a few showers could potentially crop up in the east.

Wellington sees showers developing mid to late afternoon and possibly become heavy with thunderstorms and hail as southerlies freshen, but before that, the morning looks pretty good.

Over the South Island in the east, expect sunny areas to start, but then showers will move in during the afternoon – and they could be heavy with some hail.
Chance of an afternoon thunderstorm too. from Canterbury northwards, Marlborough has a higher risk of storms and hail in the afternoon – which always presents a risk to orchardists and growers in that region.

Southland sees showers from early morning and Otago mid to late morning – these showers may contain small hail at times.
Temperatures will be down with cool west to southwest winds.

The West Coast of the South Island is going to be mostly the same, but about Greymouth northwards expect showers for much of the day, possibly heavy in the morning, with a risk of hail – but then gradually easing during the afternoon and evening.