Home > News > The week ahead looking a bit unsettled...

The week ahead looking a bit unsettled 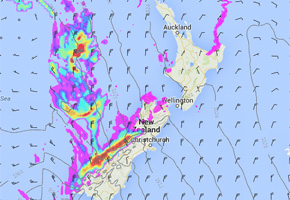 The week ahead is looking a little unsettled but as usual depending where you are the weather will be different during the course of the week with some getting settled spells at times.

On Monday we have a northerly quarter airflow increasing over the country ahead of a front moving in from the Tasman Sea. Expect periods of cloud for much of the North Island, Auckland southwards through to the Manawatu may see the odd shower about and thicker cloud during the day. The east of the North Island looks the best place to be. For the South Island patchy showers on the West Coast turn to rain later becoming heavy as the front mentioned above closes in, high cloud out east with building northwesterlies, a few spits of rain pass over Southland and Otago in the afternoon.

It is worth noting that northwesterly winds are looking to become quite strong in the evening and stay that way overnight for much of the South Island, gales are possible in exposed areas especially parts of Canterbury mainly inland.

On Tuesday the North Island sees northerly winds again, a mix of sun and cloud for most with cloud being generally thicker at times in the west. The Bay Of Plenty sees more persistent cloud during the day too with the chance of a light shower now and then. Later in the evening / overnight rain moves onto the southwestern corner of the North Island. Mostly sunny for the lower South Island with light winds, cloudier further north with rain Hokitika northwards in the west then spreading into the east coast late afternoon / evening. Rain may become heavy about the Tasman and Nelson regions later in the evening or overnight.

Northwesterlies for the North Island on Wednesday, periods of rain for much of the day south of the Waikato, rain heavy at times for Taranaki. Further north expect mostly cloudy skies but remaining dry for now, Gisborne is mostly dry for the day too. Over the South Island the West Coast sees scattered showers and northwesterlies, morning rain Greymouth northwards eases. A few showers Canterbury northwards in the east then easing later, Southland and Otago are mainly dry then mid afternoon onwards a few showers may move in.

Finally on Friday the airflow turns southerly with showers, rain eases to showers over the North Island. A ridge moves over the South Island later in the day bringing clearing skies so this could bring the potential for frosts overnight.