The week ahead – a mix of highs and lows 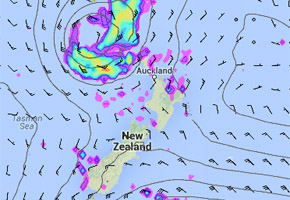 Naturally, to start the working week and to make people feel good about life yet another low pressure system heads towards the North Island out of the Tasman Sea. Cloudy skies can be expected for many in the North Island with the odd shower about for the upper half.  Winds will be from the northeast.

In the South Island cool south to southwest winds spread from Southland in the morning up into Canterbury in the afternoon, conditions will be mainly dry although a few showers will catch the Southland coastline. Nelson will most likely be the place to be with some high cloud during the day. The West Coast sees areas of cloud with light winds, cloud breaks away at night as a southerly airflow develops.

West is best tomorrow for both islands although the North Island’s west coast will be a bit windy. Our low pressure system just tickles the top of the North Island as it moves from west to east, this will bring southeasterly winds that will be a bit breezy. Expect showers in the usual places like the east coast and parts of north Auckland, northwards into Northland (in other words – in the north!)  In the west, mainly south of Auckland, southeasterly winds will bring dry conditions with some sun.  Winds will be a bit brisk.

The South Island has an easing south to southwesterly airflow along the east coast where there may be some morning cloud about – but it will clear. The West Coast is really looking like it will be a great place to be with sunny skies all day long and light winds.

Mid week starts off fairly settled as an anticyclone that was over the South Island spreads over much of the country early on, there still may be a shower or two about Gisborne and northern Northland in the air flow around the high. Cloud develops about the West Coast of the South Island from afternoon as a northerly airflow moves in, drizzle is possible at night about Fiordland.

A new low pressure system in the Tasman Sea starts to spread a northerly airflow over much of the country on Thursday, expect cloudy skies on the South Island’s West Coast with some rain, dry out east with high cloud. Expect areas of cloud for the North Island’s west coast although it may remain fairly dry till overnight when a few showers move in. The east coast is likely to be mild and warm with mainly sunny skies.

As we come to the end of the week our new low moves just south of Southland, expect rain or showers for most in the west. Dry weather in the east with high cloud as a front passes over in the morning – it could bring a few spots of rain to eastern areas too.