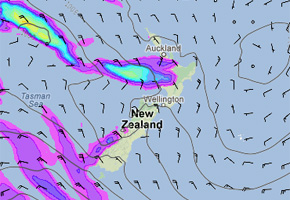 This coming week very generally speaking will be dominated by a westely airflow. This means dry most of the time in the east and wet out west.

A low pressures system crosses the lower South Island on Wednesday but for most conditions will be rather westerly. On Thursday another low will cross over the country this time more centrally.

Rain or showers for most in the west of both islands on Wednesday, dry out east with strong west to northwest winds from Canterbury northwards. Thursday is similar however there may be a few dry areas about in the west for the morning, and strong northwesterly winds become confined to the North Island.

Finally eastern districts in the South Island will get a taste of the wet stuff on Friday as the flow changes southwest, conditions clear up out west. For the North Island’s west coast conditions are still likely to be showery, showers develop later in the day in the east.

More of the same (for auckland)