Home > News > The weather pattern NZ has had since Mar... 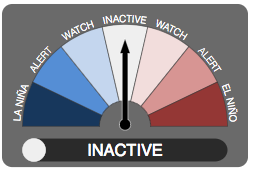 The latest climate forecast from Australia’s public forecaster may not be the best news for those New Zealanders expecting a sudden dry change – but it may still work out to be friendly to some.

Australia’s Bureau of Meteorlogy (BoM) says a neutral pattern is here until Deember. In other words we can expect no El Nino to form (which can create windy, drier, hotter summers in New Zealand) nor should we expect a return to La Nina (which can create more easterlies, humidity and rain in NZ). At least not at this stage.

It means the “neutral” set up New Zealand has had since the start of Autumn will continue until December.

“Neutral basically equals chaos in our part of the world” says WeatherWatch.co.nz head forecaster Philip Duncan. “From the moment we transitioned into Autumn we’ve had ths neutral pattern which has created messy weather for New Zealand with airflows from all directions and rain makers from all directions”.

Mr Duncan says with a neutral pattern in place it will be harder to forecast long term. “With El Nino we can say ‘hey at least we can see a trend in more westerles’ which helps us work out which areas are most at risk from drought, or flood. With neutral it continues to be ‘spin the wheel’ each couple of weeks to see what we might have to deal with”.

There is positive news with a neutral pattern too though. “We tend to see more variety of weather spread more evenly across New Zealand when the climate is what we call ‘neutral’. While we have seen flooding this autumn and winter we’re also hearing a lot of farmers tell us the past half year wasn’t too brutal overall. Everyone has a localised and individual story and a take on it, but generally speaking ‘neutral weather patterns’ can ‘spread the load’ of severe weather around a bit more which some see as a big positive here in New Zealand.

The El NiÃ±oâ€”Southern Oscillation (ENSO) is currently neutral. All international climate models surveyed by the Bureau suggest the tropical Pacific Ocean is likely to stay ENSO neutral for the remainder of 2017.

Sea surface temperatures (SSTs) have cooled over much of the central tropical Pacific during the past four weeks, and are now close to the long-term average, and within the neutral range. The 30-day Southern Oscillation Index (SOI) also remains neutral, having steadied over the past three weeks. Other indicators of ENSO, such as cloudiness near the Date Line and trade winds are also at neutral levels.

The Indian Ocean Dipole (IOD) also remains neutral with consensus amongst climate models suggesting neutral conditions are likely to persist. Some models suggest positive IOD thresholds could be reached in the coming months but these values are unlikely to be sustained long enough to classify as a positive IOD event. Positive IOD events are typically associated with below average winter and spring rainfall over central and southern Australia.