Home > News > The oceans are warming faster than scien...

The oceans are warming faster than scientists thought 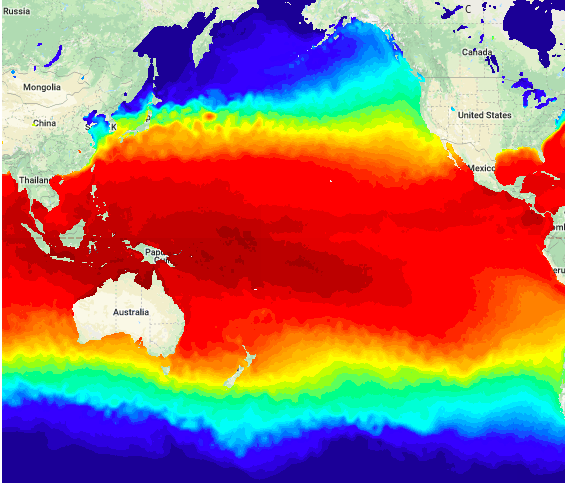 By Jen Christensen & Brandon Miller, CNN — The world’s oceans are warming at an accelerated rate and are much warmer than scientists thought — and things could get a lot worse if nothing is done to stop climate change, according to a new study.

The data, published in Thursday’s edition of the journal Science, shows that the oceans have experienced consistent changes since the late 1950s and have gotten a lot warmer since the 1960s. The oceans are heating up much faster than scientists calculated in the UN assessment of climate change released in 2014.
For the new study, scientists used data collected by a high-tech ocean observing system called Argo, an international network of more than 3,000 robotic floats that continuously measure the temperature and salinityof the water. Researchers used this data in combination with other historic temperature information and studies.
The study authors say the warming is happening because of climate change created by such human activities as the burning of fossil fuels.
“The ocean is the memory of climate change, along with melted ice, and 93% of the Earth’s energy imbalance ends up in the ocean,” said study co-author Kevin Trenberth, part of the Climate Analysis Section at the US National Center for Atmospheric Research. “Global warming is close to ocean warming, and 2018 will be the warmest year on record, followed by 2017, then 2015.”
Though a warmer ocean might make for a more pleasant swim, it carries deadly consequences.
A warmer ocean causes sea level to rise, bringing problems like dangerous coastal flooding. It leads to the loss of sea ice, heating the waters even further. It can affect the jet stream, allowing cold Arctic air to reach farther south, making winters more intense, and endanger the lives of animals that depend on sea ice like penguins and polar bears.
A warmer ocean also contributes to increases in rainfall and leads to stronger and longer-lasting storms like Hurricanes Florence and Harvey.
“The warming is convoluted with natural variability, and one of the warmest spots was where [Florence] developed this past year and where Harvey developed this previous year,” Trenberth said. “The warm water fuels the evaporation and moisture for storms.”
For every 1 degree Celsius (1.8 degree Fahrenheit) increase in temperature, there is 7% more moisture in the air. Ocean temperatures around Florence trended 1.5 degrees C (2.7 degrees F) warmer than normal, contributing to about 10% more moisture available in the atmosphere.
We could see many more weather-related problems if the ocean continues to warm at this accelerated pace, especially if there is no human intervention to manage climate change, experts say.
“Global warming is rearing its head,” Trenberth said.
If humans don’t do anything to mitigate climate change, warming in the upper part of the ocean will be six times higher by 2081-2100 than total ocean warming in the past 60 years, researchers estimate. If, however, humans act and can reach the goals set by the Paris agreement, ocean warming could be cut in half by 2081-2100, the authors said.
The study fits within other reports like the United Nations warning in October that humanity has just over 10 years to act to avoid disastrous levels of global warming. That report urged governments to make “rapid, far-reaching and unprecedented changes in all aspects of society.”
The UN report found that the planet would reach the crucial threshold of 1.5 degrees Celsius (2.7 degrees Fahrenheit) above pre-industrial levels by as early as 2030, precipitating the risk of extreme drought, wildfires, floods and food shortages for hundreds of millions of people.
A US government report in November delivered a similar dire warning that the country could lose hundreds of billions of dollars and thousands of lives by the end of the century due to climate change.