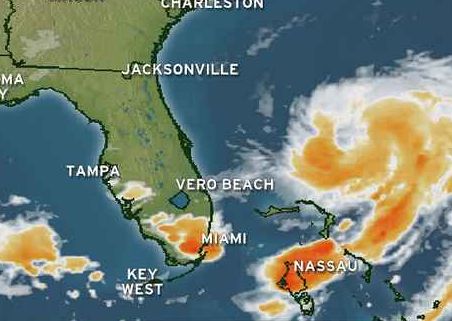 Small Tropical Storm Bret will move generally northeastward and away from the northwestern Bahamas with some strengthening possible through Wednesday NZT, though not quite reaching hurricane strength.

Bret is no threat to the U.S. It could minimally affect Bermuda on about Friday or Saturday NZT as it weakens.

Elsewhere, a tropical wave is over the tropical eastern Atlantic just southwest of the Cape Verde Islands, producing some cloudiness and showers. Significant development is not expected during the next couple of days, but some models suggest some gradual development could occur later this week as it crosses the central tropical Atlantic and then reaches the Windward and Leeward Islands this weekend.

– The graphics on this page should automatically update.  If they (or some) no longer appear that is because our guys at The Weather Channel have stopped updated the maps for this storm, because it poses no real threat to land.