The last of the spring whine – Saturday’s situation & outlook 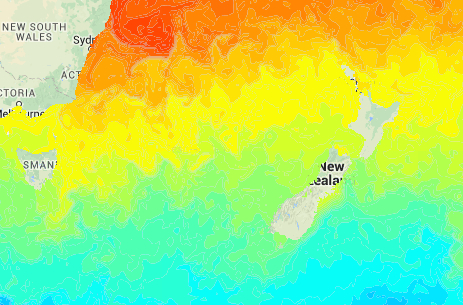 Things are going to step up one more notch before finally calming down on Sunday, though for how long it’s hard to say.
We have a fairly tightly packed low pressure system moving across the lower South Island in the morning then out to the east of the South Island in the afternoon, meaning winds around the low will be quite strong.

Around the lower North Island, we’re looking at strong northwesterly winds particularly in Cook Strait (again), coming ahead of a front pushing through in the late afternoon or evening – this will have ramifications for the South Island too, as we’ll see soon.

The East Coast of the North Island can expect strong winds, possibly blowing gale force for a time in the afternoon, especially about Wairarapa.
In the west, strong westerlies will affect pretty much everyone south of Taranaki too, and possible gales around Whanganui after lunch.

Those Cook Strait winds coming ahead of a front will affect inland parts of the South Island too, with a strong and bitterly cold Southerly change coming up the country from morning.
Southland and Otago are first in the firing line, with temperatures dropping and winds picking up from early to mid morning, with Canterbury not far behind.

Southerlies will be strongest about Canterbury with gales likely near the coast, and even Christchurch is in for gales at times, probably early to mid afternoon as that southerly comes in and makes a nuisance of itself.
With that change comes showers, possibly heavy and thundery in the afternoon and early evening, but they shouldn’t last long.

Strong southerlies will run into Blenheim, in the evening, but by then the system should have dried itself out, so only cloud is expected, with some scattered rain overnight in patches.

And rain on the West Coast of the South Island will start heavy, then easing in the afternoon and clearing by evening.